Primary 1 Deferral - Who Decides When A child Starts School?

Earlier this month I brought a motion to Council calling for equity of approach in policy on the school starting date. Currently the ability to defer a child's first year of primary school is something well known to parents whose child is born in January or February - however, children born after the beginning of the school Autumn term are also entitled to defer. This is not widely known and secondly, in Fife, there is a lottery in terms of funding for an additional year of nursery. This is granted automatically for those children born in January and February. Not so for those born from late August until 31st December. The motion I presented sought to change that. This came about following being contacted by a number of parents. The motion was predictably defeated by the SNP-Labour coalition who claimed all is well - tell that to the parents who have had sleepless nights and weeks of stress over an inconsistent and lacking in transparency policy.
Below is the text of the motion and then the speech.

Council believes that:
·      Children born from September to December are also entitled to be deferred for a year at parental request and should also receive a funded nursery place for this extra year. This should not require any additional assessment.
·      An additional funded year should be able to be taken at either a Council nursery or a Partner Provider.

Council therefore instructs officers to prepare a report for consideration by the Education & Children’s Services Committee on the adoption of that policy.

Council additionally:
·      Asks officers to ensure that information on the right to defer is clearly available both on Fife Direct and in nursery settings (both Council and Partner Providers).

Motion Speech:
GIRFEC, a term we hear often by politicians when talking about education of children in Scotland. Getting It Right For Every Child. Yet, we know that is not always happening – particularly as we have seen recently with P1 SNSA, which thankfully this Chamber voted to withdraw Primary 1 children in Fife from.

Recently it has come to my attention though that whilst the Scottish Government continues to push another flagship policy, this time on increased nursery provision for all 3 and 4 year olds, that all is not well in nursery provision and there is a complete lack of equity for some youngsters in Fife.

Primary school deferment; the decision not to place a child of less than 5 years into school in the August intake. It is relatively common knowledge and has been for a long time that a child born in the months of January or February can be deferred from starting school. For example, a child born in January 2015 would be 4 years and 8 months when the school term begins this coming August. The parents of this child could, rightly choose to defer. No-one would question and funding for another year at nursery would be automatic.

However, for the child born in December 2014 who would be 5 years old in December 2019 – around 4 months after the school term begins, their parents can also legally defer them. However, the big difference is nursery funding would no longer be automatic.  Herein is where the difficulties and the lack of equity begin.

Over the past few weeks I have been contacted by an increasing number of parents who have been sharing their often very stressful experiences in securing this additional funding.

One parent wrote to me stating that:“When deciding to defer my December born child I was advised by the HT to write a letter outlining the reasons. I wrote to the Education Service in early December and then completed an application form to defer.”

No response was forthcoming to this until February this year when the parent was advised the application was unsuccessful. Fife Council’s own Deferral Guidelines for Parents states that: “A child with a date of birth from September to December will require to be assessed in order to receive a funded nursery place for an extra year. A meeting will be arranged to discuss the case. This will normally take place at the nursery school your child attends. You will be invited along with the Health Visitor and any other relevant professional.”

In this case that did not happen. There was no meeting.

However, another parent contacted me to tell me that: “No-one at our catchment primary had encountered this before and I could not find the information on Fife Council’s website (which is of no surprise, I will come to that later) and only eventually found the form through the Deferral Support Facebook page. Following completing the form an Educational Psychologist visited the nursery and two weeks later there was a further meeting, this time also with the Head of Infants and the key worker.”

This is quite a different experience to the previous example. What this case did further highlight was that the deferral request form to complete for September to December born children is the same one as the January and February born children – possibly this lack of transparency goes some way to explaining the outcome of a survey conducted by the National Parent Forum of Scotland which found that whilst 80% of parents were aware of the right to defer for children born in January and February only 19% were aware of this same right for children born in September through to December.

Whilst reading through the various sections of legislation that address school start date in Scotland I discovered a set of guidance produced by the ADES – Association of Directors of Education in Scotland, which looked at “Guidance on Deferrals for Primary School Education”. Within this document it states that: “Deferred entry considerations should be detached from the appraisal of special educational needs. There was no necessary link between the two. Some children were simply ‘not ready’ for primary school. They should not have to prove any kind of educational or psychological deficiency in order to be considered for a deferred pre-school place.” (section 2.4 Sub-Committee)

Yet, the Deferral Request form provided by Fife Council does ask for the reason why. The child not being 5 years old and based on the judgement of the parents is surely enough?

One parent wrote to me stating that at a deferral request meeting there were 10 individuals, including a paediatric doctor, in the room discussing if the request should be granted. Is this what parents’ who are already concerned about how their child will cope if they have to send them to school before they are 5 years old, to be put through?

Fundamentally, the problem here, is the lack of equity in this policy. As I have said, there is no legal requirement to send any child to school until their 5thbirthday. Neither parents of those September to December born children and quite often, judging by some of the detail provided in correspondence which I have received, nor are nursery and school staff are aware of this either. More worrying though when a deferral is turned down a parent has to make a decision. They can send them to school even if they are convinced they are not ready. Or they can pay for the nursery hours for the additional year. This is all well and good if they can afford. What of those parents who cannot afford nursery costs? There is much talk in this Chamber of equality and a fairer Fife but this policy is immediately disadvantaging children whose parents cannot afford to fund this additional year. That is quite simply wrong.

To exacerbate matters and where once again GIRFEC seems to be completely ignored, is if funding is granted for an additional year of nursery this must be taken in a Fife Council nursery, even if your child is currently in a partner provider. Whilst if funding is declined then the child must be removed from the Council nursery. That is just unacceptable.

This motion is calling to address this lack of equity and ensure that all children who are not five years old on the date of the term beginning can be deferred for a year and granted additional nursery funding if the parents request it.

In terms of financial impact there is no “extra cost” as such – the Council will be paying either for that extra year of nursery or a year at primary school. Additionally, whilst we cannot compare ourselves to all other local authorities we can draw on decisions passed. Falkirk Council in September 2018 changed its policy and despite cuts to Council budgets, is able to fund an additional nursery year where requested.

The Scottish Government’s own policy on funding for nursery makes this even more inequitable – a child born from September to December begins nursery in the January and if deferral is refused they will have had 1.5 years of nursery. For a child born in January or February, who we know will receive automatic additional funding, will potentially then receive 2.5 year of nursery funding. How on earth is that judged as fair?
Finally, the transparency of this information. Well that is in itself no easy task. When I first began to examine this, I went straight to Fife Direct and thought it would be relatively easy to identify the deferral guidelines. It was not and one document entitled Early & Delayed Entry to Primary Schools – which is very useful given the detail it contains on the process for a further year of discretionary nursery funding, is apparently not something issued to parents – so I was told.

Instead, Fife Direct offers an abbreviated version – which is available once you can find it on the website. It is interesting that in COSLA’s most recent briefing note, under Addressing Concerns, mention is made of the need to ensure that “polices and procedures are freely available to the public” (to be published 1/5/19).

Information has to be available and transparent. One parent advised me that because her child was in a partner nursery it took several months before a copy of deferral guidance ever appeared. Partner nurseries in Fife have had to make many adjustments to fit with the criteria requested by the Council, this must work both ways and they are readily in possession of all the information on deferral guidance.  The amendment states that Education & Children’s Services should ensure this information is easily accessible – surely it already should be?

I started today with mentioning GIRFEC and I recognise that for the majority of deferral cases that have come before Fife Council the outcomes have been positive and a further year of funding has been granted. However, this has come at the expense of peace of mind for many parents. Some who have had to wait months, some who do not even know where to begin in making the request to defer and some who do not even know it is possible to do so – remember that figure across Scotland for September to December born children – only 19% of parents were aware of this. Secondly, if that request is turned down it results in those who can pay will pay and those who cannot will often have to send their child to school against their better judgement.

I move the motion. 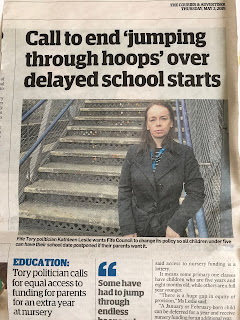 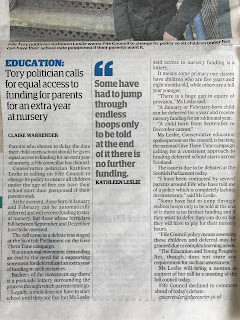