This past week has been fairly busy. I have been out and about in the Ward catching up with residents, including getting feedback on the poorly advertised changes to bin calendars over the Christmas period. I have also been to a number of meetings including the first Invertiel TRA of the year - one of my favourite meetings. An informative Q&A session was held with the Scouts in Burntisland and finally there is a resolution to the long-running saga of the fence around the viaduct. All that must wait for another post though.

The Scottish Government set its budget last week, relying on the support of the Greens. It's a budget to hammer all hardworking Scots. Council tax increases, proposed parking charges at work and cuts to local authorities. The SNP at Holyrood may claim to be funding local authorities sufficiently but this is absolute nonsense, we have so much ring-fenced money now (read - top-down centralisation) that local authorities are having to cut back and cut back. If there is any austerity in Scotland it is the making of this SNP government.

What I have continued to do is speak out against proposed draconian cuts to Education in Fife. This SNP-Labour coalition need to be doing a lot more to protect vital services within education and petition their leaders at Holyrood for more funding (what is interesting is that Labour at Holyrood criticises the cuts being made and rightly so. However, in Fife they are in a cosy coalition with the SNP and this means an almost complete silence on criticising them - the price of being a junior partner in a coalition?). The threatened closure of the Business Education Department at Queen Anne in Dunfermline remains an ongoing concern - which I have outlined in the first letter below. The second one refers to the motion to the Education & Children's Services Committee which called for a report to be made available - this of course was voted down by the SNP-Labour councillors who continue to work closely together. See the link to my earlier post on this - http://www.kathleenleslie.co.uk/2019/01/school-budgets-what-level-of.html

Here is what I had to say. 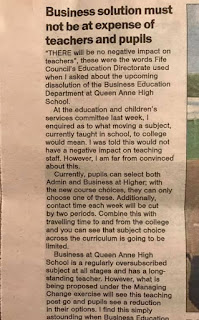 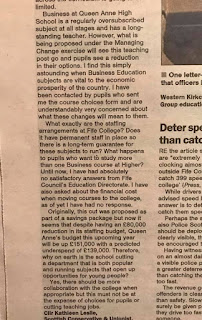 “There will be no negative impact on teachers”, these were the words Fife Council’s Education Directorate used when Cllr Kathleen Leslie asked about the upcoming dissolution of the Business Education Department at Queen Anne High School.

“At the Education & Children’s Services Committee last week I enquired as to what moving a subject, currently taught in school, to college would mean. I was told this would not have a negative impact on teaching staff. However, I am far from convinced about this” said Conservatives Education Spokesperson, Cllr Leslie.

“Currently pupils can select both Admin and Business at Higher, with the new course choices they can only choose one of these. Additionally, contact time each week will be cut by two periods. Combine this with travelling time to and from the college and you can see that subject choice across the curriculum is going to be limited.”

“Business at Queen Anne High School is a regularly oversubscribed subject at all stages and has a long-standing teacher. However, what is being proposed under the Managing Change exercise will see this teaching post go and pupils see a reduction in their options. I find this simply astounding when Business Education subjects are vital to the economic prosperity of the country. I have been contacted by pupils who sent me the course choices form and are understandably very concerned about what these changes will mean to them.”

“What exactly are the staffing arrangements at Fife College? Does it have permanent staff in place so there is a long-term guarantee for these subjects to run? What happens to pupils who want to study more than one Business course at Higher? Until now I have had absolutely no satisfactory answers from Fife Council’s Education Directorate. I have also asked about the financial cost when moving courses to the college, as of yet I have had no response.”

“Originally this cut was proposed as part of a savings package but now it seems that despite having an £80,000 reduction in its staffing budget Queen Anne’s budget this upcoming year will be up £151,000 with a predicted underspend of £139,000. Therefore, why on earth is the school cutting a department that is both popular and running subjects that open up opportunities for young people?”

“Yes, there should be more collaboration with the college when appropriate but this must not be at the expense of choices for pupils or cutting teaching jobs.” 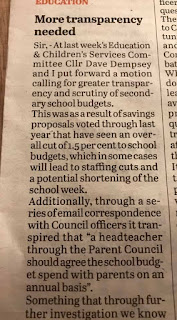 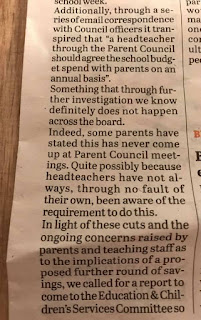 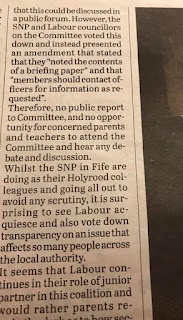 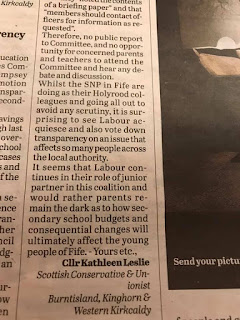 At last week’s Education & Children’s Services Committee Cllr Dave Dempsey and I put forward a motion calling for greater transparency and scrutiny of secondary school budgets. This was as a result of savings proposals voted through last year that have seen an overall cut of 1.5% to school budgets, which in some cases will lead to staffing cuts and a potential shortening of the school week.

Additionally, through a series of email correspondence with Council officers it transpired that “a headteacher through the Parent Council should agree the school budget spend with parents on an annual basis”. Something that through further investigation we know definitely does not happen across the board. Indeed, some parents have stated this has never come up at Parent Council meetings. Quite possibly because headteachers have not always, through no fault of their own, been aware of the requirement to do this.

In light of these cuts and the ongoing concerns raised by parents and teaching staff as to the implications of a proposed further round of savings, we called for a report to come to the Education & Children’s Services Committee so that this could be discussed in a public forum. However, the SNP and Labour councillors on the Committee voted this down and instead presented an amendment that stated that they “noted the contents of a briefing paper” and that “members should contact officers for information as requested”. Therefore, no public report to Committee, and no opportunity for concerned parents and teachers to attend the Committee and hear any debate and discussion.

Whilst the SNP in Fife are doing as their Holyrood colleagues and going all out to avoid any scrutiny, it is surprising to see Labour acquiesce and also vote down transparency on an issue that affects so many people across the local authority. It seems that Labour continues in their role of junior partner in this coalition and would rather parents remain the dark as to how secondary school budgets and consequential changes will ultimately affect the young people of Fife.