Thursday's full Council meeting saw Fife vote to withdraw from P1 SNSA. After a process that saw a vote to withdraw back in October, which was then overturned at the Education & Children's Services Committee then following a call-in to the Scrutiny Committee by my colleague Cllr Richard Watt we got to last Thursday.

Going through the debate again and questions being asked of lead officers who attended the Council meeting a vote was held. Tabled by the Labour group and agreed by the rest of us, with the exception of the SNP, Fife Council vote to withdraw the testing of Primary 1 children using this method of assessment.

I was nominated by Cllr Watt to speak to the call-in item two weeks ago at the Scrutiny Committee where I outlined why I believed these assessments are not appropriate for Primary 1 pupils and why I believe it is possible for the local authority to withdraw. The link to what I said at Scrutiny can be found here - http://www.kathleenleslie.co.uk/2018/12/p1-snsa-scrutiny-committee.html

Below is the text of what I said on Thursday followed by some links following the vote. I absolutely believe this was the correct decision. The more that I researched this the more convinced I have become that no Primary 1 pupil should be sitting a numeracy assessment of 32 minutes and a literacy assessment of 44 minutes. This goes against the philosophy of Curriculum for Excellence and is not conducive to the learning of such a young child.

Today, for the fourth time I am speaking out against P1 SNSA. Having spent a considerable of time these past couple of months reading the evidence, which continues to grow, as to why these assessments are completely unsuitable, educationally flawed and potentially damaging to the well-being of Primary 1 children, I am yet further persuaded that we must halt SNSA for P1 now.

There are two parts to what I will say today. The first being the case against SNSA for P1 and the second why I believe Fife Council can withdraw from these assessments.

Play Scotland has stated that it is “tests of opportunities, exploration and everyday adventures” that matter not academic tests in Primary 1. One of the earliest documents produced for the Early Years was Building the Curriculum 2 which stated “A key message is that approaches to fostering learning need to be flexible to take account of the needs of the child, and will change as children develop”[2]. Unfortunately, these assessments are not flexible and they take up time where tests of opportunities and exploration could be taking place instead. Even worse, feedback from teachers in Fife released under the FOI have cited that alignment with Experiences & Outcomes and the benchmarks for P1 are difficult to see and that “assessments are narrow and do not reflect the principles of CfE”.

Very explicit examples of concerns about SNSA here in Fife are within the 700 pages of the FOI request. I would urge that you look at it.

Whilst claims of distressed children have been dismissed by more than one councillor I would direct them to the Scottish Government’s own SNSA User Review which notes at paragraph 30: “Some teachers reported that children found the assessments upsetting.”

Is it any wonder? On the Scottish Government’s own User Review, the average time for the assessments are 32 mins for numeracy and 44 mins for literacy. How are these administered in a busy classroom of 30 P1 children? In Fife, despite claims of no assessment windows, the feedback is clear “tests carried out en masse” and “The Council set out the timings” continuing “It was decided by management with minimum notice given to staff”. “All pupils have to complete them in May regardless of readiness” – that confirms what the Scottish Government’s User Review states – that 16,000 assessments were taken in one day in May across the country. Others commented the impact on learning and teaching with a SFL teacher having to take groups of children to do the assessments.

The amendment passed in this Chamber in October requested a report be brought to the Education & Children’s Services Committee outlining if withdrawal from the assessments in P1 was possible. A report was duly presented, containing, I might add, a fair bit of content that was completely irrelevant to the question being asked. We were presented with “positive” and “less positive” takes on the assessments, along with how many children had sat the assessment and how many had been withdrawn – 1 child, but that may be because a survey carried out by Connect found that 70% of parents had no idea their child was sitting an SNSA.

Is it possible? There is nothing in the report to suggest it is not possible. Having sought legal advice, the Directorate notes there are two key points to consider. The first is that there is “there are no specific regulations enacted or statutory guidance issued imposing a legal duty to carry out P1 SNSA.” Instead it was “anticipated that education authorities would therefore adopt the assessment scheme without the need for regulations imposing these”. That of course would require an amendment to the Education Act as the Education Secretary in his missive to local authorities of 4thSeptember provides advice that “SNSAs, in common with virtually all aspects of the Scottish curriculum and its delivery, are not provided for in legislation. This means that they cannot be seen as compulsory”.

The report further states that the Council would have to demonstrate that it had evidence that such “withdrawal was a reasonable and proportionate step” and also “that it had alternative means of assessing the children it is obliged to educate.”

The Directorate’s own response notes that P1 “SNSA appears to be the least strong and effective of all the year groups at which SNSA is undertaken”. It also states that “a significant number of schools remain to be convinced of the immediate advantages of using SNSA at P1”.  Leading to the question that does any of this constitute a need to withdraw or is it about identified areas for improvement?

What is this improvement? The Scottish Government has made much of the fact that around one third of questions will be replaced – an improvement? Possibly, but that was already in the pipeline long before the User Review so they knew something was not working. Secondly, the idea of replacing “problematic” questions, or what could be described as teething problems could be argued as a case to continue if it weren’t for the fact that thousands of these assessment questions were already carried out with children prior to SNSA going live.

The User Review also suggests there could be better ways of “incorporating the SNSA into the teaching”. Thereby, inferring there must be something wrong with the current implementation by class teachers.

Does Fife have an alternative means of assessing the children it is obliged to educate? Yes, it does. A tried and tested method which not only assessed literacy and numeracy as SNSA does but which looked at cognitive, physical and emotional development in a child in P1, these tests were also far shorter.

The report claims that the new assessment will produce potentially highly valuable information that will accord with national standards. However, it is difficult to feel at all convinced by this claim when Scotland’s largest teaching union states that at best they assess between 5% and 10% of the skill set covered in P1. The tests are being carried out in the most part near the end of the year by which time class teachers will have used numerous other assessment methods and therefore forms no baseline.

That is not GIRFEC and it is not what the play-based learning philosophy of Curriculum for Excellence was ever supposed to be about.

These assessments by their very name “standardised” and “national” indicate they are just a huge data gathering exercise by the Scottish Government which puts both teachers and pupils under pressure. Pressure that no 5 year-old, should be facing. I support the motion. 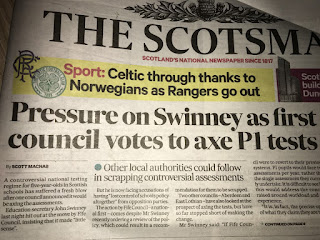 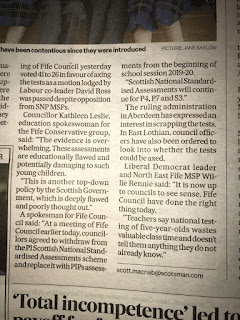 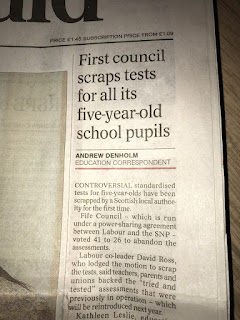 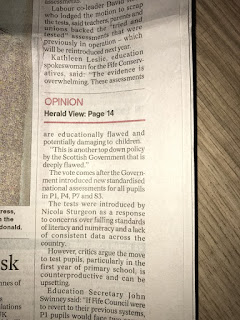 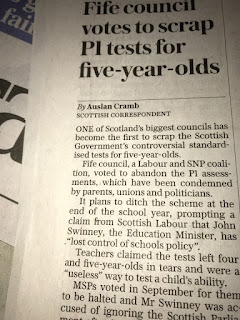 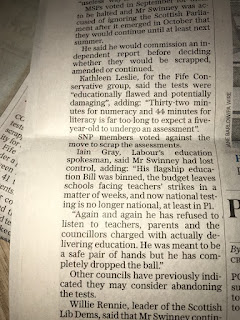