Following on from Fife Council voting to halt Primary 1 assessment I was asked to provide a comment to The Courier.

An SNP MP claimed councillors voting to halt these tests was "political vandalism". Below is the text of the press comment and a link to the article.

A letter to the media is also attached here.

Previous comments on Primary 1 assessments can be found at:

A link to the hundreds of concerns raised about Primary 1 Assessment and released under a FOI can be found at this link - https://beta.gov.scot/publications/foi-18-01829/


“These comments are quite simply, astonishing. Last week Councillors from all parties, with the exception of the SNP called for a halt to these tests. This was not some political grandstanding but was based on the evidence presented by teachers to the Education Secretary and the SNSA (the body responsible for setting these tests). There are hundreds of email responses from teaching staff across Scotland calling for a halt to these damaging and unnecessary assessments.”

“The early years of Curriculum for Excellence is supposed to be a play-based learning environment. Instead, with these new tests we have teachers trying to sit with one pupil and do the test whilst trying to also teach the rest of the class. Pupils have become upset and demotivated when instructed to do the assessment and don’t understand what is happening.”

“One response from a Primary 1 teacher in Fife said that the school had had to buy in supply staff simply to cover the hours it was taking to get the test done and with no apparent explanation as to what it was aiming to achieve.”

“These tests are conducted online and immediately disadvantage any child who does not have a grasp of computing skills on entering school, they bare no relation to what is being taught in the classroom and are anything but standardised. Staff have reported that the system generates easier questions if required and some children will simply guess the answer as they find it so stressful.”

“Monitoring the learning of Primary 1 children is not about standardised assessment but about nurturing the social, emotional and cognitive development of the child. There is no evidence to suggest such testing will do anything to raise attainment. I would suggest that Mr Chapman has a read through the email responses to his Education Secretary and instead of attacking opposition politicians he starts listening to what teachers and education professionals are saying.”

“Concerns raised by councillors seemed to be mocked as ‘scaremongering’ by the SNP group who appeared to be oblivious to the growing calls for a halt to these assessments. They claim education is their number one priority but refuse to listen to the concerns of teachers. It really is quite incredible.”

At last week’s Council meeting three motions were presented, all asking for a halt to Primary 1 Assessments. Following a lengthy debate, an amendment was voted for by all, with the exception of the SNP group. The amendment called for the Executive Director of Education & Children’s Services to prepare a report asking how withdrawing from these assessments can be achieved and that Council asks the Scottish Government to withdraw requirements for P1 assessments. This followed on from a Holyrood debate led by Scottish Conservative MSP Liz Smith, calling for a halt to P1 assessment, which was supported by Labour, the Lib Dems and the Greens and saw the SNP government defeated.

These tests are carried out online, immediately disadvantaging any pupil who arrives at school with little or no knowledge of using a computer, these pupils quite often being from deprived backgrounds. The tests eat into teaching time and have resulted in some schools having to buy in supply staff. More worryingly though, children have been left distressed, crying and feeling demotivated. How do we know this?

One only has to read through the hundreds of responses from teaching staff in a recently released FOI request, to discover the sheer scale of concerns being expressed. Interestingly, but possibly unsurprisingly these comments appeared to be immediately mocked by the SNP group as scaremongering.

Whilst SNP councillors in Fife claimed there are little if any complaints about Primary 1 tests they should perhaps go and read through the hundreds of emails available on the FOI request, I certainly have. That way they may familiarise themselves with the very real and genuine concerns and be seen to actually listen.

This attitude though is so typical of the SNP both at the local authority level and their failing government at Holyrood. Centralisation being the key theme. Scotland has seen more and more powers devolved over the past decade but that has been coupled with a government that has sought to increasingly centralise and remove local accountability.

Fife Council sent a clear message to the SNP government last week; Primary 1 assessment needs to be halted. Lets see if they are listening. 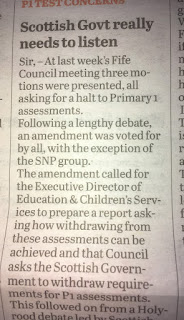 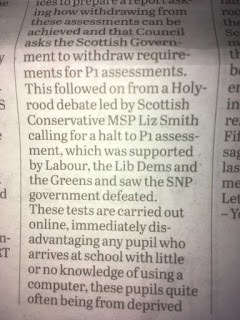 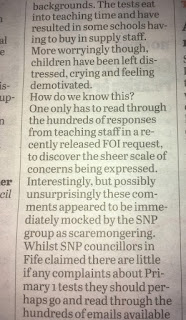 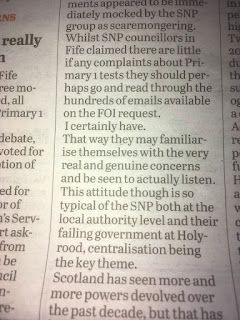 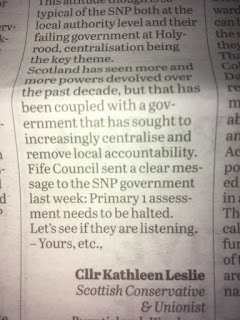