A couple of weeks ago I wrote here expressing my astonishment at a swipe from a Labour Councillor about the motion raised by Cllr Darren Watt and myself to eliminate single-use plastics from Fife Council.

The councillor who did this claimed that initial moves to eliminate single-use plastics had nothing to do with the motion by Cllr Watt and I and that we were claiming success that was not ours to claim. Last week I responded to this in the Fife Free Press (see below).

As I have reiterated time and time and time again - the elimination of single-use plastics is something that we ALL must be working towards. I have spoken out on this in Council, at Community Council meetings, at school parent council meetings, in the media and on social media. I am a long time environmentalist and am frequently horrified by the amount of plastic packaging I find on products in supermarkets, at the amount of single-use plastics I see thrown into landfill bins, the littering of plastics along our coastlines and most of all - the absolutely horrendous impact on marine life as a result of the discarding of these products. I will continue to work towards a single-use plastic free environment.

All of the above is why I was so outraged at the suggestion being made that somehow I was not so committed to this and had voted down a motion to eliminate single-use plastics. I most certainly did not.

Here is my response:

I was very surprised at Cllr Langlands feelings of being “appalled at the inference” that somehow myself and Cllr Darren Watt were responsible for Fife Council finally addressing the need to phase out single-use plastics (FFP 30/8/18).

The motion to begin the process of eliminating single-use plastics was first tabled by Cllr Watt and I in March as we had been dismayed to see the array of plastic coffee cups, water cups, cutlery and lunch boxes that are used in Fife House and do not always end up being recycled – in part due to these being mixed materials which are notoriously difficult to recycle. Until our motion was brought forward we had seen no evidence at Committee level of the need to urgently address this as a local authority.

The motion led to impassioned debate in the Council Chamber, where colleagues from all parties, agreed the issue did need to be addressed. What though followed is far removed from Cllr Langlands understanding of it.  He states that the Conservatives did not vote for the SNP-Labour Administration motion, which is indeed correct. That is because there was no Administration motion to vote for. An amendment was predictably produced by the SNP and Labour which they voted for whilst we voted for the original motion.

What he does not seem to be aware of is that Cllr Watt and I spoke with his SNP colleague prior to the Council meeting and offered to attach our motion to their amendment. This was refused. Our approach was a pragmatic one, begin with the smaller items and then escalate the process – which the Environment Committee has now voted to do.

Cllr Langlands states that we are not members of the Environment Committee, this is correct. However, as he well knows this does not mean we cannot speak out on this topic. Unlike of course Cllr Langlands, who maintained a complete silence in the Council Chamber in March when the elimination of single-use plastics was first debated.

I though, will continue to speak out until I see that everything that can done has been done for us all to reduce and eliminate single-use plastics which are causing environmental catastrophe globally. 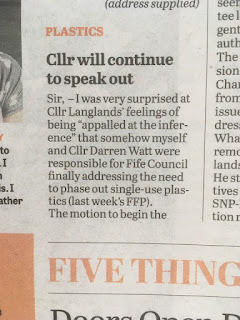 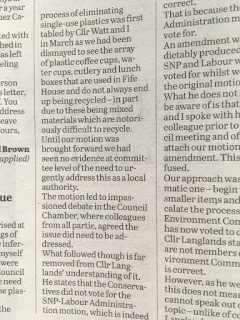 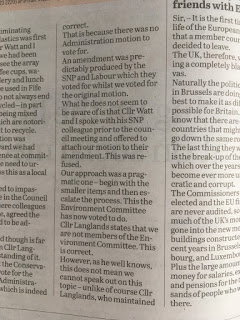 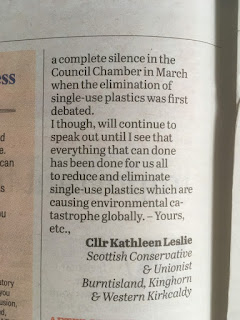