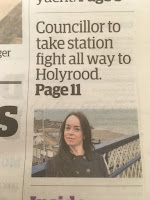 I still sometimes find it strange to be writing about the need for accessible railways stations in 2018. Believe it or not though, there are 104 railway stations in Scotland that are not fully accessible. By that I mean where there is no access to the rail platform/platforms by means other than only steps. Whether it be a ramp or a lift there are far too many stations that do not have full access.

Whilst this makes the railway network all but impossible to access for some - particularly anyone with mobility restrictions, it also makes some platforms extremely difficult to access for those with prams, buggies and heavy suitcases. There are so many railway stations that have had upgrades and when you are not restricted in mobility it makes it all to easy to overlook the fact that many struggle to access trains.

Earlier this week I had a meeting at the Scottish Parliament with the Shadow Secretary for Transport, Jamie Greene MSP. I wanted to raise the specific issue at two railway stations in the area I represent - Burntisland and Kinghorn. 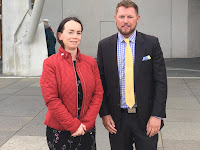 There is no accessibility to the northbound platform at Burntisland for wheelchair users and no access to the southbound platform at Kinghorn for wheelchair users. If you have accessibility restrictions you have a choice - you don't alight in Burntisland but instead stay on until Kinghorn or Kirkcaldy and then by a long and complicated (and what seems) a not particularly efficient process you have to arrange to have a taxi collect you. By the same token if you are travelling south and live in Kinghorn you can alight in Kirkcaldy or Burntisland and then go through the whole call a taxi thing and wait until one turns up. Fair? I don't think so.

If you are a wheelchair user you could also take the option of staying on the train until Kirkcaldy then use the underpass and head back down the line to Burntisland and alight on the southbound platform. What happens though if you have been enjoying a night out in Edinburgh and get the last train? Maybe you can't get a train back from Kirkcaldy. I guess that means you leave your night out early and take an earlier train. Astonishing, right? Quite simply this is unacceptable. Or you may be disabled and drive to Burntisland Railway Station, park your car and take the train to Edinburgh. However, on your return journey you won't be returning to the station of origin and getting in your car to go - because if you are a wheelchair user there is no possibility of leaving the northbound platform. At all. An absolute disgrace and completely unacceptable.

A meeting was held of the Burntisland Community Development Trust (BCDT) last month to begin the process of reestablishing a campaign for an accessible railway station. To the meeting I took the feedback Transport Scotland had sent me. Their "reasons" why Burntisland does not fit their criteria for an upgrade. Completely dissatisfied with their reasons/excuses I wrote back to them and provided a rebuttal to their claims (see below).

When I met with Jamie Greene MSP I wanted to highlight the situation in Fife with some railway stations but specifically in my Ward and see what could be done to try and push for some focus on this.

The Devolved and Reserved aspects of the railway network in the UK come into this - what I do not want though is the usual Scottish Government "its all Westminster's fault" nonsense as this is an issue which the Scottish Government through Transport Scotland can seriously look to address.

The next control period for work on the railways begins in April 2019 (the period in which Transport Scotland advised me that Burntisland does not fit the criteria). The control period covers:

There is money in the budget to cover all of these but the funds are obviously infinite. What I did say though was that in terms of an upgrade, Burntisland is less complicated than many railway stations - there is an old ramp behind the wall on the northbound platform and there is also a tunnel under the railway line. Therefore, there is some basic, albeit old, infrastructure already in place.

I also learned that there is a fund known as the Squire Fund which was established to collect revenue where Scotrail had had to pay performance penalties - due to late trains, cancellations etc. The fund can be used to deliver improvements such as "station shelters, train doors, train toilets and train announcements" (Scottish Government statement). What I was angered to hear though was that the Scottish Government used some money from this to issue free rail travel to passengers who had experienced delays.

All in all I felt the meeting was positive due to the action points brought about from it. These include Jamie Greene MSP to table a question for the Scottish Government on the need for fully accessible railway stations - this will happen on 4th October. Additionally, through my press campaign and my disappointment at Transport Scotland stating Burntisland Railway Station did not meet the criteria for an upgrade they have now requested to meet with me to discuss further. Watch this space.

If you have been affected by inaccessible platforms in Fife then do please get in touch.

Here are my responses to Transport Scotland:

Responses to the assessment criteria rationale.

1.   Footfall – Burntisland has a higher level of footfall than several other stations in Fife. Looking at the below table which I have put together – data shows usage of stations on the East Coast line where it passes through Fife and/or the Fife Circle. On this basis I do not feel Burntisland misses the assessment criteria.

2.   Stations where there is a particularly high incidence of disability – Can you further clarify this? Is this based on a percentile of the town? I would find it rather strange for Burntisland to have data that would be far removed from the level of disability in other towns. Can you please also clarify your definition of disability? Does this purely relate to mobility or across all spectrums of disability?
3.   A particular local circumstance such as the proximity of hospitals, a school for disabled children or a military rehabilitation centre – The only station that would be in proximity to a larger hospital would be Kirkcaldy. Cupar and Glenrothes have smaller hospitals. However, in Fife more and more services are based at the Victoria Hospital in Kirkcaldy - some medical services previously offered in Burntisland have relocated to Kirkcaldy. Schools for disabled children, please see below data.

·     Please note - ** Rosslyn School is a special school within Viewforth High School and Balwearie High School (catchment high school for Burntisland) has a dedicated Department for Additional Support (DAS) - both of these schools are in Kirkcaldy. In Fife, pupils in a special school or a DAS are provided with transport to and from school. Additionally, pupils at both Rosslyn School and Balwearie are drawn from across the Kirkcaldy area – which incudes Burntisland. Therefore, there are two schools which support pupils with additional support needs (ASN), some being complex needs, within the Kirkcaldy area and therefore, Burntisland.
4.   Availability of third party funding – Can you please provide detail on what third party funding (if any) went into the upgrades to other stations within Fife (both on the Fife Circle and the East Coast line).
5.   Stations what would help to fill “gaps” in accessibility in the network – Burntisland is inaccessible to rail users with a disability which affects mobility on the northbound platform. Kinghorn (the next station on the line) is inaccessible to the same group, but on the southbound platform.

I look forward to a more detailed explanation to the criteria that has been set. 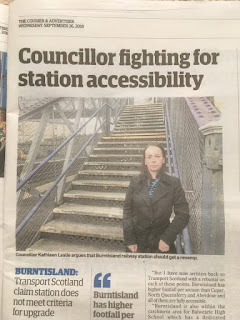 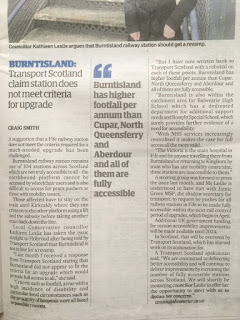