Over the past number of weeks increasing concerns have been voiced by staff, parents and some Councillors about the impact of draconian cuts to high school budgets in Fife.

Of 18 high schools in Fife, 12 are facing cuts to their budgets with further cuts being likely next year. Let us keep in mind that this is all whilst the SNP Government at Holyrood continues to parrot its line of education being its "number one priority" - all beginning to look rather hollow now. Figures released this week show only 7% of schools make their performance information available to parents - only 6 in Scotland fully meet the requirements on providing curriculum and attainment data. This is not good enough.

More concerning is that the number of exam passes has fallen at the fastest rate since records began. Yet we continue to be assured by this SNP Government that all is good in education. Cuts to secondary school budgets in Fife are going to hit and they are going to hit hard. Cuts mean the possibility of departments closing, a reduction in practical subjects, reduction in subject choice and ongoing uncertainty for teachers, headteachers and most importantly, pupils.

In response to cuts to the high school in my Ward, Balwearie High School, I wrote the following letter for the local paper. This issue needs to be continued to be pushed. Fife Council's SNP-Labour Administration passed this budget with little or no information that indicated this would be the impact on schools. The blame lies firmly at the door of the SNP at Holyrood who are sitting on a £500million underspend, thus starving local authorities of much needed cash. Labour in Fife though appears to be scared to tackle this, sits silently and instead leave criticism to their MSPs at Holyrood. Very disappointing for a party which clearly has had a good track record in the past with education in Fife.

Further scrutiny is required and more questions need to be asked. This simply is not good enough. Every week I receive emails from concerned parents (and the occasional) teacher about upcoming cuts - people are concerned and rightly so.

The SNP have tried to talk up the Pupil Equity Fund (PEF) as the great saviour brought in by their Government at Holyrood as a way to offset these cuts. This is complete nonsense, PEF addresses a different need and targets specific groups and is based on free school meal ratios - it does not provide money for permanent teaching staff - ultimately schools need teachers and teachers who can teach across the curriculum. No fancy project will eliminate the attainment gap unless you have the staff and subjects there for pupils to realise their full potential.

At this stage I am awaiting a response from the Education & Children's Services Directorate on the formula applied to reach the budget savings in high schools in Fife.

Here is what I wrote to the press this week:

Concerns raised by Balwearie High School parents over Fife Council’s round of budget cuts to education are extremely alarming (FFP 6/9/18). Balwearie is one of 12 high schools to see a chunk cut from its annual budget. These cuts amount to £265,167 for the school over one year and the possibility of an additional £80,000 cut the following year.

In real terms this could see the reduction in promoted posts and the merging of faculties. Even more concerning is the possibility of a redesigned curriculum that will feature an increase in class sizes due to cuts to practical subjects and a reduction in subject choice. Other high schools such as Madras, Bell Baxter and Queen Anne are facing similar draconian savings.

When I have previously enquired about the savings proposals I have been assured that due to money coming directly from the Scottish Government in the form of Pupil Equity Funding (PEF) that these savings will be balanced out. What absolute misleading nonsense. PEF is in place to target and close the attainment gap but is not an infinite resource and it does not buy in permanent teachers. What will close the attainment gap is having enough teachers and enough subject choices to give all pupils the ability to realise their potential.

Fife Council is having to cut almost £2.3 million from its education budget over the next two years. This is of course whilst the SNP Government at Holyrood sat on a £500 million underspend last year. If education really is the “number one priority” of this Scottish Government then it is about time local authorities were provided with sufficient funding to stop all cuts to education now. 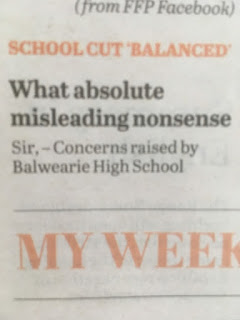 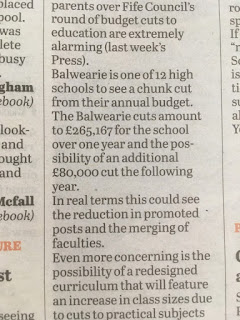 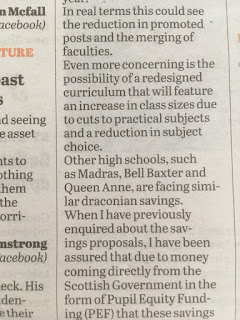 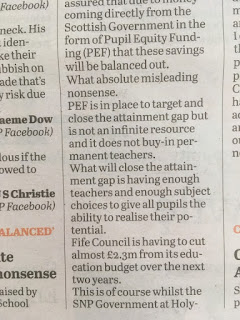 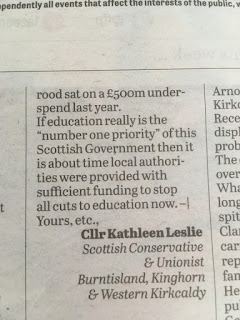