Teacher Shortages - There is only so much the Council can do

Last week I wrote about the shortage of teaching staff across Scotland as the new term begins - http://www.kathleenleslie.co.uk/2018/08/new-term-begins-where-are-all-teachers.html

231 schools are still searching for teachers, some with multiple vacancies. Scotland has 3,400 fewer teachers than it did in 2007 (the year the SNP came to power), couple this with the GP crisis, shortage of nursing staff, lack of police and it really doesn't look great.

Whilst claiming education was their "number one priority" - the oft repeated but looking rather hollow, mantra of the SNP Government at Holyrood, the reality is somewhat different. Instead of building and developing a workforce we see a decrease in teacher numbers, a fall in the number of ASN teaching staff, decreased subject choices in S4, a huge reduction in those taking qualifications in modern languages, a cap on university places for Scottish students, cuts to college places, increased bureaucracy and moves towards centralisation of education - although the Education Bill is currently on (indefinite?) postponement (the list goes on...).

The following article highlighting the shortage appeared in the Dunfermline Press. In response I wrote a letter (see below). 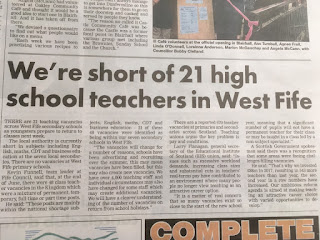 Here is what I had to say in response:

Fife Council has admitted that it is 21 high school teachers short in West Fife as the new school term begins (DP 9/8/18). Shortages exist within English, Maths, CDT and Business Education. This comes as no surprise to many of us given that concerns over staffing have time and time again been raised by the trade unions, senior management staff, teachers and parents. I have had several parents contact me over the past couple of months concerned that subject contact time in the senior phase has been reduced in some areas due to a shortage of staff.

Lochgelly High School was left without a Computing teacher last Autumn, are we to see a repeat of this? There is a shortage of Business Education teachers, clearly a popular subject, yet we know that this department at Queen Anne High School has been under threat of closure through the managing change plan.

Subject choice for National Qualifications in S4 has been reduced to six in some Fife high schools, particularly those in the most deprived areas. Meaning those who want to leave school earlier will have fewer National qualifications and those who stay on for Highers are limited in the options they have.

Fife has done much to attract teachers to the local authority over the past few years but there is only so much the Council can do. Scotland has 3,400 fewer teachers than it did when the SNP came to power in 2007 and the new academic year begins with almost 700 positions across the country being unfilled. The claim that education is the “number one priority” for this SNP Government is beginning to look rather hollow. 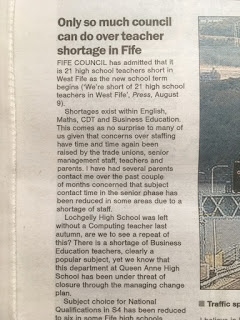 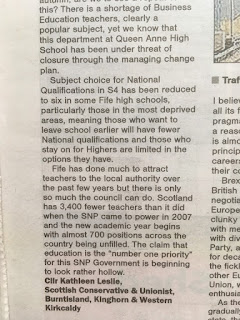