"Council recognises the devastating impact plastic pollution is having on our environment and the escalating costs of recycling such materials. Council acknowledges we must lead by examples, step up our own efforts and encourage others to follow suit.
Fife Council will begin by transitioning away from single-use plastics commencing at Fife House and Rothesay House, Glenrothes."

Both myself and Cllr Watt spoke of the devastating impact that single-use plastics are having on our environment, in particular to marine life. We both emphasised that in line with other public bodies, restaurants, schools and businesses up and down the country, there should be a gradual transition away - our belief was to begin this process at the two main Council buildings in Fife.
Disappointingly (but unsurprisingly) the SNP-Labour coalition produced an amendment and voted down our motion. We had hoped to gain cross-party support but their unlikely alliance instead did not accept our proposal and instead comments were made about jobs would be lost and other dramatic remarks.


However, we were very encouraged to discover that the Environment Committee took on board what we had said and a recommendation was moved for Council to begin this process, looking at procurement, the places where it may not be so easy to be rid of single-use plastics and a more sensible approach in that products such as plastic cups could be gradually eliminated. Ultimately this move came about due to the motion to Council in March - myself and Darren brought the issue to the attention of members, took a pragmatic approach which addressed both the urgency to act but the understanding that this would be a steady transition.
Imagine my surprise then when I opened this week's Fife Free Press and noted that a Labour councillor - who incidentally did not express a single word of opinion in the Council Chamber on this subject, criticise us for expressing our delight that his SNP-Labour coalition had finally reacted and realised that Fife Council is really no different to anywhere else and people are keen to transition away from single-use plastics.
We did not reject his SNP-Labour coalition's motion because there was no motion to reject. They put up an amendment to our motion. We voted for the motion they, predictably voted for the amendment. Therefore, it is inaccurate, misleading and downright false to suggest that we voted against their motion. A motion and amendment is not the same thing, I (wrongly?) assumed councillors were aware of this.
The Conservative group at Fife Council took the lead on this and myself, as someone who has for many years now been a strong advocate of recycling, the elimination of single-use plastics and a higher tax on polythene shopping bags, do not accept such utter nonsense being spouted. 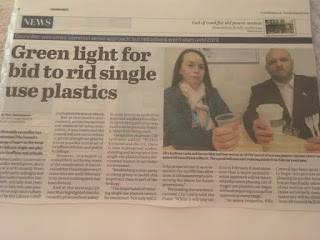