Today another depressing statistic was released, at the beginning of this new term, across Scotland, 231 schools are still searching for staff, some for multiple posts. - https://www.telegraph.co.uk/politics/2018/08/15/200-scottish-schools-have-vacancies-pupils-return-summer-break/ 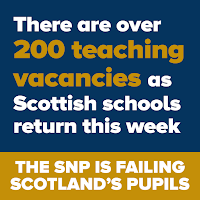 Last week it was revealed that 21 high school posts are still unfilled in West Fife. Nearly every week over the Summer period I have received correspondence and comment from concerned parents and staff as to what is going on. This post though focuses on a particular concern that came to me back in May and affected one department in a West Fife high school. Such was my concern that I raised the matter at Full Council on 28th June. The question I put to the SNP-Labour Administration was:

Can the Administration confirm that there are no plans to close the Business Education Department at Queen Anne High School at the end of the school session 2018-2019?

Neither the schools, nor the Directorate, are in a position, yet, to determine what the curricular offer available in a school for session 2019/20 will be.

Curriculum rationale is determined by each school to suit its specific needs and is also based on the curricular choices of pupils.
Schools now have more flexibility to meet better the needs of all learners to increase achievement and raise attainment. However, all learners are entitled to experience a senior phase where they can continue to develop the four capacities and achieve qualifications.

Why did I ask this question? I specifically asked this as I was approached by a member of staff who stated that in the school's managing change exercise the Business Education department had been singled out as potentially to close (this managing change exercise is available on the school's website). This was despite it being oversubscribed in numbers and meaning that if it was to close at the end of session 2018-2019 (new Autumn term 2019) those pupils studying for a National 4 who wanted to progress to National 5 and those studying National 5 and wishing to progress to Higher, may no longer have that opportunity.

Such was my concern that I wrote to Council officers but did not feel I had a satisfactory answer. Looking at the above answer I do not feel it is much more satisfactory. Since this was asked I was contacted by another member of staff who was also aware of the potential closure of the Business Education department and also the possible reduction in options on offer within the RMPS department too.

What is going on? The SNP Government continue to claim that education is their "number one priority" yet we have seen a drop in the number of subject choices in schools across Scotland, a fall in the number of teachers, a fall in specialist teachers (Additional Support Needs and teachers of the Deaf) and the removal of Scotland from some of the international data on standards in attainment.

Only last year one school in Fife was left with no Computing teacher (http://www.kathleenleslie.co.uk/2017/08/lochgelly-high-school-what-happens-next.html) and I have been told of at least one other high school in the local authority with a shortage of Computing teachers.

Determined to get an answer that would provide assurance that any pupil who wished to continue with their Business Education studies next year I asked the below supplementary question. The answer is less than satisfactory - given the location of the school, the subject being oversubscribed and popular in other West Fife high schools in the Dunfermline area, this answer is simply waffle that says nothing.


SUPPLEMENTARY
Can you confirm that pupils will be able to carry on with this subject at higher level?

ANSWER
Cannot confirm at present but schools work together to meet curriculum needs of pupils in the area.

Following the Council meeting there was some press coverage. We therefore, appear to be in a situation here in Fife where there is a shortage of teaching staff in some areas whilst at the same time the SNP-Labour Administration - due to a £500 million underspend by the SNP Government at Holyrood, are looking to cut back on departments and staff. 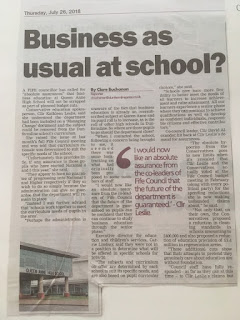 The faux outrage expressed in this post by the SNP co-leader of Fife Council is quite astounding. He claims we agreed to these cuts. He talks of more flexibility whilst we know subject options in the senior phase in Fife schools have been cut, leading to less pupil choice. (see figures below *)

My letter as a response to the SNP co- leader's comments:

I was surprised by Cllr Alexander’s response to the possible closure of the Business Education Department at Queen Anne High School.

The Administration’s Budget stated the need to “review the budget allocation formulae for secondary school teaching staff”, which the Conservative group did not disagree with. However, as is often the case, the devil is in the detail. The Budget statement went on to read “to deliver a more equitable and targeted distribution, reflecting current requirements”.

Business Education at Queen Anne High School was oversubscribed as a subject choice this year. Therefore, there is no question of the current requirement meriting a cut.

It has since come to my attention that RMPS staff were advised that certificate classes would be removed and the department cut to one teacher. Again, despite demand for the subject.

If the Administration is serious about delivering a more equitable distribution of resources they need to be explaining what is equitable about proposed cuts to areas where there is demand?

Cllr Alexander appears to be following the example of the First Minister by deflecting blame instead of answering the question. The question is quite simple; will the Business Education Department at Queen Anne High School remain post the 2018-2019 session? Pupils, staff and parents need to be given that assurance. 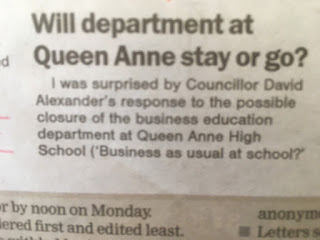 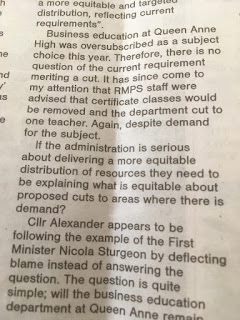 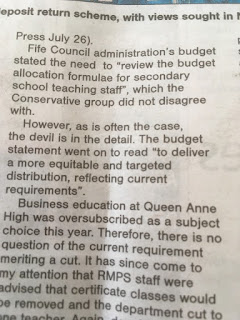 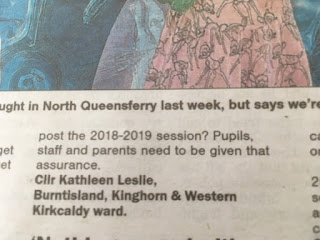 And the following week... 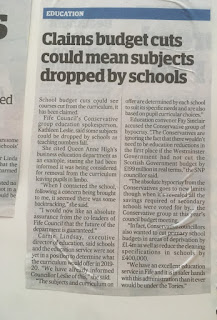 More faux outrage - with the usual SNP mantra "its Westminster's fault". Education is fully devolved and the SNP Government at Holyrood is sitting on a £500 million underspend last year - money that is desperately needed by local authorities for education and other services.

* The number of subjects pupils can study for the National Qualification in S4. The "gold standard" used to be 8. Number one priority?...