Hello everyone. I must apologise for the long delay between posts. I think it must have been this fantastic weather this Summer which has kept me away from writing quite so much. Although, having said that, I have been putting plenty of updates on my Councillor Facebook page, so have a swipe over to it to see what I have been doing.

This is going to be a fairly short post before I get back to writing on here more regularly. It is just to provide a little update on the accessibility issue at Burntisland Railway Station. I wrote about this earlier and the link can be found here - http://www.kathleenleslie.co.uk/2018/04/disabled-access-burntisland-railway.html

An initial meeting to bring together community groups and elected representatives is to be held later this month. Here is the comment (in full) which I issued as a press release earlier this week.

Following contacting Network Rail in April to request a meeting to look at accessibility at Burntisland Railway Station, Cllr Kathleen Leslie is optimistic that progress can be made.

“Whilst I felt the response from Network Rail was noncommittal, last year the UK Government announced additional funding for station accessibility improvements in the next Rail Control Period. This will begin next year and run until 2024.”

“Here this will be via Transport Scotland and my understanding is that they have started work on their nomination list so I believe that this gives us a real opportunity to push for Burntisland Railway Station to be considered.”

Residents have written to me highlighting their concerns with the lack of access and the Burntisland Community Development Trust has organised a meeting for 22ndAugust to create a steering group. This will include various groups within the town and also, hopefully, support from locally elected members including MSPs.”

“Prior to the meeting I will be contacting Transport Scotland to request further information on their nomination list for station upgrades. Combined with the feedback I have received so far from residents and affected rail users, I do believe there will be a valid case to progress so that a fully accessible rail facility exists in Burntisland.”

“I continue to encourage anyone affected by the lack of access to get in contact with me.” 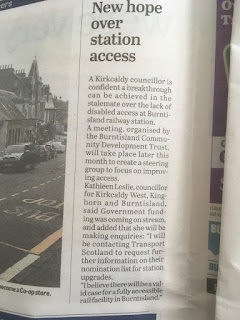 (Thanks to the Fife Free Press for publishing this)