School Capacity - No Room At The School

This is just a short post (I have been extremely busy this past week with numerous meetings, chasing up ongoing issues and attending a policy conference - all of which I am wanting to write about later this week) on a rather surprising and disturbing account in a local newspaper last week. The article detailed the worrying narrative of a parent who was advised her son would not get a place in a Dunfermline high school following a placing request.

The text of the letter written by myself and Cllr David J Ross can be found below. It is worth reminding readers that there is one final statutory consultation meeting to be held on rezoning proposals - that is on 23rd May at Inverkeithing High School. If you have not attended and this affects or concerns your child I would absolutely urge you to attend the final session.

I went to the presentation at Queen Anne High School this evening, which was relatively quiet - I think due to a larger turnout at the two previous ones. Having listened to parents ask officers questions I am still left feeling as I did before. It is not so much the rezoning proposals that are the issues, there is, in my opinion, more sense in this current proposal. It is the timing - the speed, the hurried approach I have been unhappy about.

As I have stated on previous occasions, the rapid development of Dunfermline through extensive house-building around the Eastern Expansion was not something that no-one was aware of. Previous Council Administrations and Officers have been well aware there would eventually be a capacity crisis and a need to rejig zoning - therefore, this should have been a process that was done over a gradual period of time to cause the least impact on youngsters. I have heard far too many stories this past number of months of the emotional toll this lengthy process has taken and the confusion youngsters have felt when they have continued to be unsure of where they will attend high school.
Getting It Right For Every Child (GIRFEC) is at the centre of education and that includes not only teachers, school support staff, social work and psychologists - it also includes elected representatives. This has to be kept in mind throughout this process.

We were shocked to read that a Dunfermline parent was advised her son would not get a place at Dunfermline High School following a placing request. At last month’s Education & Children’s Services Committee our group asked the question that if those affected families by the capacity crisis at Woodmill High School put in a placing request for another Dunfermline high school would it be granted? We were told, yes.

Therefore, it is very worrying to read that a family has had their placing request knocked back due to a failure by Fife Council over the past few years to recognise that such rapid house-building was going to lead to a crisis in school place availability.

It is also deeply concerning to read that Shelagh McLean describes those who won’t be able to attend Woodmill High School as having “the opportunity to attend Inverkeithing High School”. Is it an opportunity for a young person to be separated from their peer group and sent to a different school? Is it an opportunity to be sitting in April with only two months of primary school left and not know where you are going to high school? What sort of “opportunity” is this?

10,000 new homes will be built in Dunfermline and West Fife over the next two decades and we now have one high school at capacity (Woodmill) and another (Inverkeithing) that will be at capacity in four years if the revised rezoning proposals go ahead. Currently the only assurance we have is that a report will come to Committee in the Autumn that will shed some light on funding for new schools. None of this is of course of any good to those children who still don’t know what high school they will go to in four months. 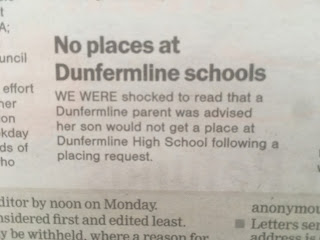 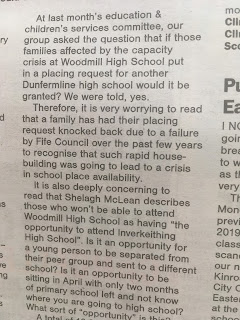 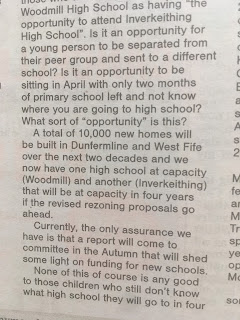 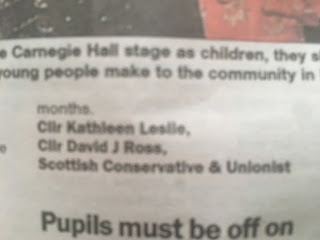