I have to say, it may be Monday evening but I am still feeling a little out of sync as regards what day of the week it is. Last week's arrival of the "beast from the East" saw huge parts of the country grind to a halt as snow seemed to be tipped from the sky for hour after hour...and then it seemed, day after day. Well perhaps not that many days, but it certainly began to feel like it. Building snowmen and drinking hot chocolate whilst huddled under a blanket in front of an open fire may be the stuff of romantic novels and Christmas cards, but when it begins to interfere, hold-up and negatively affect everything we pretty much take for granted (that would be getting to the shop for bread and milk, being able to hop on a bus or our car and visit family and friends and those who are alone) that is when it isn't quite so much fun. Indeed, if any.

Wednesday last week saw snow, blizzards and high winds and by the close of Thursday rural and isolated communities were cut-off. I was particularly concerned about the closure of the A921 into Kinghorn from Kirkcaldy and that Burntisland was completely cut off on all 4 approaches (one of course being the Loch Road). That is when it becomes frightening. Communities cut off by road means elderly and vulnerable people cut off from essential services, such as meals on wheels, hospital appointments and visits from carers. Fife Council did grit the roads and I would like to take this opportunity to thank them for the work they did - it was above and beyond. Drivers worked through the night to ensure that primary routes had some access. However, I cannot help but feel this move towards centralised services in Glenrothes has left many rural areas isolated and I do believe questions need to be asked. Weather of such extremes is relatively unusual here, it is around 7 years ago since we had such a terrible Winter, however, simple things such as the removal of grit bins in communities did not help. I witnessed, read about and saw on TV endless examples of communities coming together to clear sections of road and to help each other out and that is fantastic - including Burntisland Primary School offering lunch to residents on Friday and TRAs in Kirkcaldy assisting with getting shopping for residents who couldn't go out. What is not so fantastic though is when a grit bin has been long since removed and once you clear that street there is no grit to put down on it to keep it relatively cleared and safe.

Community Councils over the next number of weeks will play an invaluable role in providing extensive feedback to councillors as to how resilience plans played out and what went right and what went wrong, who was reached, who was not, what the biggest problems were. I know I will be listening carefully to what Community Councils have to say along with all the feedback via email, social media and telephone that I have had from residents.

In the meantime, continue to wrap up warm, continue to look out for each other and keep us councillors posted.

This week there is a full Council meeting so I am currently preparing for that. Therefore, the remainder of this post is just some extracts on various local matters that I have had coverage about in the media. Most of which I have posted on my councillor Facebook page. Once again, please do not hesitate to get in touch with any questions or concerns. 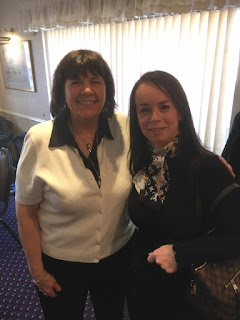 Frank's Law
Last month I attended the Conservative Women's Scottish Council AGM in Perth where the lovely Amanda Kopel and Miles Briggs MSP spoke about the progress of "Frank's Law". Amanda has long since campaigned for free personal care for the under 65s in Scotland - as the law stands anyone requiring personal care who is under 65 is unable to access this for free. Amanda's late husband, the footballer, Frank Kopel, was diagnosed with dementia at 59. Amanda's story is well documented, therefore, rather than me attempt to provide a summary here, which would not do it justice, more of it can be found at -
http://www.scottishconservatives.com/2017/01/bill-on-franks-law-to-be-brought-forward-if-snp-drags-heels/
http://frankslaw.org


BiFab - Uncertainty Again
February also saw renewed worry and concern for employees at Burntisland based BiFab with the threat of redundancy once again on the horizon. If the yards are to close this will be a devastating blow to the workforce and also the local community in Burntisland. Local businesses have voiced concerns about the impact on shops and retailers in the town. I am continuing to monitor the situation and both the Scottish and UK governments have been seeking a positive outcome. 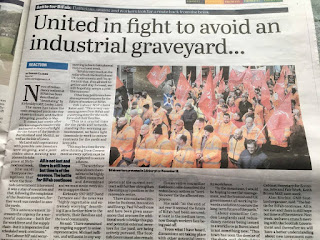 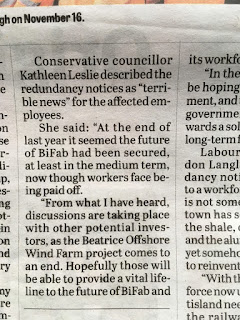 Schools
Just before the Council set its budget for this year I had a visit to Strathallan Primary School to speak with the headteacher, Mrs Logan. This was very informative where myself and my fellow Ward councillor had an opportunity to ask lots of questions and also receive an update on school priorities, PEF, attainment, successes and parking! I am pleased to note that I have had positive meetings in schools in the Ward and have found them to be both informative and insightful - we have many fantastic places of learning in Fife. There is much to be proud of. 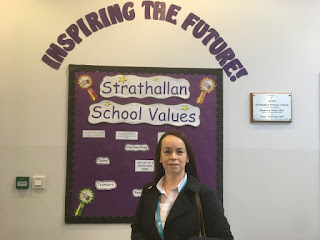 Invertiel and the Litter Problem - Solution!
Anyone who has been following this blog will know this is very much an ongoing situation - but here I have some very positive news! I had some coverage in the Fife Free Press last week in regards to the ongoing situation with litter around Invertiel - or as the case may now be, the reduction in litter. This was a bit of positive news story and I am looking forward to providing further feedback to the TRA later this week - watch this space!
https://www.fifetoday.co.uk/news/environment/kirkcaldy-pupils-prompt-action-on-rubbish-problem-1-4694815 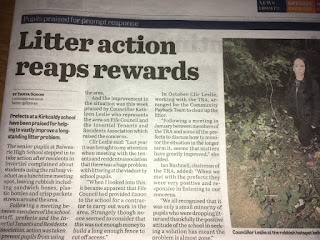 Dog Fouling - There Is NO Dog Poo Fairy - Clean It Up
Rather than go on a rant here, which is entirely possible I will just once again issue a plea - if you have a dog and it poos (and yes, they all do!) then CLEAN IT UP - your dog cannot and you are creating a health hazard and could be fined. I have had an ongoing case in Kinghorn whereby a number of residents have contacted me deeply concerned about some grassy areas being used on a daily basis as some sort of public toilet facility for dogs. Just DO NOT do it.
My letter to the Fife Free Press 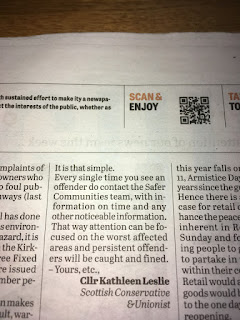 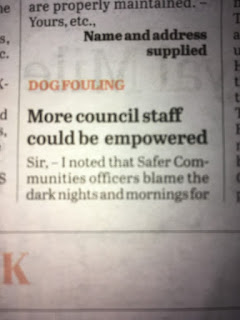 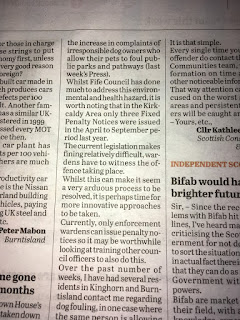 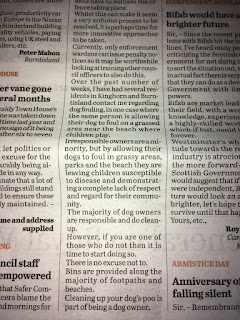 I noted that Safer Communities officers blame the dark nights and mornings for the increase in complaints of irresponsible dog owners who allow their pets to foul public parks and pathways (FFP 15/2/18). Whilst Fife Council has done much to address this environmental and health hazard it is worth noting that in the Kirkcaldy Area only 3 Fixed Penalty Notices were issued in the April – September period last year.

The current legislation makes fining relatively difficult, wardens have to witness the offence taking place. Whilst this can make it seem a very arduous process to be resolved it is perhaps time for more innovative approaches to be taken. Currently only enforcement wardens can issue penalty notices so it may be worthwhile looking at training other Council officers to also do this.

Over the past number of weeks, I have had several residents in Kinghorn and Burntisland contact me regarding dog fouling, in one case where the same person is allowing their dog to foul on a grassed area near the beach where children play. Irresponsible owners are a minority but by allowing their dogs to foul in grassy areas, parks and the beach they are leaving children susceptible to disease and demonstrating a complete lack of respect and regard for their community.

The majority of dog owners are responsible and do clean-up. However, if you are one of those who do not then it is time to start doing so. There is no excuse not to. Bins are provided along the majority of footpaths and beaches. Cleaning up your dog’s poo is part of being a dog owner, it is that simple.

Every single time you see an offender do contact the Safer Communities team, with information on time and any other noticeable information. That way attention can be focused on the worst affected areas and persistent offenders will be caught and fined."

Mystery Noises
I received an email around three weeks ago from a resident in Raith Estate in regards to a mysterious noise that sounded like a gunshot and was being heard at regular intervals throughout the day. Over the course of a week that one email rapidly expanded to emails and 'phone calls. Such was the coverage the Fife Free Press ran a short story asking people if they knew what it was. Now though it seems the mystery has been solved and it is some sort of bird scaring device to keep the birds away from crops. Now that may all be fair and well but the level of disruption and noise pollution that is not only affecting residents but upsetting pets, means this needs further investigation. I am currently awaiting an update from the relevant officer - rest assured, I am onto this...
https://www.fifetoday.co.uk/news/what-are-the-mystery-banging-sounds-across-kirkcaldy-1-4693640 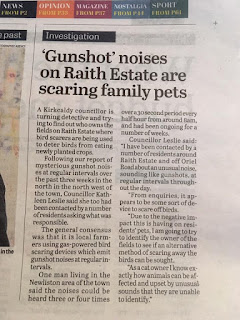 Save Our Surgeries - Street Stall
Two weeks ago the Fife Conservatives held a street stall on Dunfermline High Street which was attended by Miles Briggs MSP - Shadow Secretary for Health. We had many wonderful responses and conversations with residents, not only from Dunfermline but from across Fife. The common theme was - lengthy waiting times to see a GP. I am keen for residents to let me know their experiences of waiting times at their local GP. Unfortunately this past decade the SNP Government has not forward planned and put sufficient infrastructure in place to address the increasing crisis in the NHS. Along with education, policing and other services the NHS has suffered due to a government that has only been interested in the one issue of independence and absolutely nothing else.
Here are a couple of links worth checking out -
http://www.scottishconservatives.com/2017/10/snps-health-record-fewer-gp-practices-larger-patient-
lists-longer-waiting-times/
http://www.scottishconservatives.com/2017/11/snps-multi-million-gp-recruitment-scheme-secures-just-18-new-doctors/