Agenda item 6 on Tuesday 27th March at the Education & Children's Services Committee was: Statutory Consultation On A Proposal To Rezone Existing Secondary School Catchment Areas In Dunfermline And West Fife

Following earlier rejecting rezoning proposals for Dunfermline high schools by Committee and the looming capacity crisis at Woodmill High School, on Tuesday councillors were presented with a new list of proposals for statutory consultation.  Committee papers - http://publications.fifedirect.org.uk/c64_D1A42D9E-DB6E-E246-7011B0A126540719.pdf
Prior to committee, the Fife Conservatives gave their backing to the new set of proposals. Whilst theses are not a long-term solution and indeed, the option presented, if it goes ahead, will see Inverkeithing High School over capacity by 2022 (according to the Council's own projected school roll data). However, this will also address catchment anomalies and see Dunfermline pupils attend school in Dunfermline and all the primary schools in Rosyth now go together to Inverkeithing High School. Proposals will also end the decades long practice of Torryburn pupils travelling all the way to Inverkeithing when Queen Anne is closer.
The long-term solution is the building of new high schools to accommodate the growing population in Dunfermline and West Fife. Over 8,000 new homes have been built in the catchment areas of Dunfermline, Inverkeithing, Queen Anne and Woodmill High Schools since 2000 and another 10,000 homes allocated for development. Dunfermline and West Fife need new high schools - please see motion to Council in December 2017 - http://www.kathleenleslie.co.uk/2017/12/new-schools-for-dunfermline-lets-talk.html

Cllr Kathleen Leslie said: “Whilst we are supportive of the new proposals brought before Committee, this result is the outcome of poor planning by previous Council Administrations.
We agreed last year that Dunfermline pupils should attend Dunfermline schools and other catchment anomalies needed amended. Torryburn Primary School pupils travelling to Inverkeithing High School never made any sense when Queen Anne was geographically closer. Just as rezoning Masterton pupils to Inverkeithing High School was completely nonsensical.

However, correcting anomalies should have been a longer-term and better thought out process, a process that had pupil well-being at the centre of it. Instead, failure to address the looming capacity crisis at Woodmill by the previous Administration whilst rapid house-building continued meant councillors were presented last July with hurried proposals which officers believed we would just rubber-stamp. This year placing requests and resilience training have been offered as some sort of way to alleviate worry and stress felt by parents and children over uncertainty of where primary 7s will go to high school.

The capacity problem at Woodmill was recognised at least two years ago, 10,000 homes are allocated for development and the revised proposal will mean that by 2022 Inverkeithing High School will also be over capacity. Options for new high schools will not come to Committee before the Autumn.” 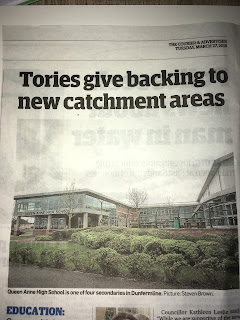 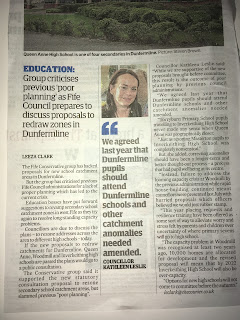 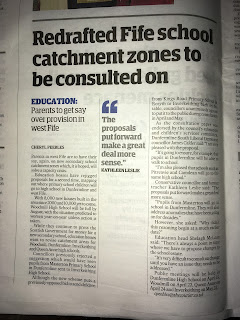 Four public meetings for this statutory consultation will be held. Place and dates are as follows: