Today I proposed my motion to the full Council, as I discussed on here yesterday. Please see the link to the previous article - http://www.kathleenleslie.co.uk/2017/12/new-schools-for-dunfermline-lets-talk.html 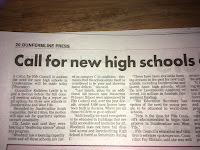 Unsurprisingly, the Administration proposed an amendment and the amendment was passed. I had hoped, given the previous commentary by the pre-May 2017 Labour Administration - who pointed the lack of movement on this due to no Scottish Government funding being forthcoming, that we may have had some tacit support. However, when you form a coalition that sort of outcome is indeed, almost unheard of.

However, I think we at least had agreement around the Council Chamber that the school estate does need addressed and that the Council will push for this. My concern though is that the amendment reads that relevant reports must go to the Education & Children's Services Committee and the Property & Facilities Committee for discussion - but when? The amendment states no frequency or regularity. I had proposed a quarterly report on the status of all three to full Council. Whilst, I accept that perhaps, at least in the short to medium term it may be more suited to reporting coming to Committee what I am dismayed about is that there is no status on how regular feedback will be. Most surprising was Labour's Cllr Helen Law who seconded the Administration's amendment. This is the same Councillor who one year ago hit back at the SNP led Scottish Government for not moving the school estate forward, there was none of that today.

To provide context here is the text of the amendment which was passed:

"Fife Council notes the Administration's continued commitment to the delivery of new high school buildings in West Fife.
Fife Council recognises the inclusion of £50m in its capital plan towards this aim and remits officers to continue dialogue with the Scottish Government, Scottish Futures Trust and other stakeholders to progress this.
Fife Council requests that relevant reports are taken to the Education and Children's Services Committee and Assets, Property and Facilities Committee for discussion, debate and decision as appropriate."

Judge of that what you will - as my group leader, Cllr Dempsey is always keen to remind -  "the devil is in the detail" - and that is where I am not so confident. We have no answer on timescales at all - "relevant reports are taken" - when?

Thus another year closes and whilst we are told relevant reports will be taken to appropriate committee, I cannot, unfortunately, report back when this will happen.

Please find below the full text of my motion to Council.

“Schools should be part of a world class learning environment" those were the words of Education Secretary, John Swinney at a Reform Scotland conference I attended in October. On that I couldn’t agree with him more. A world class learning environment can and does mean many things, one of those being classrooms and schools fit for the 21st century.

As we draw to the end of 2017 the latest projection, is that Woodmill High School in Dunfermline will potentially be 70 pupils over capacity by next August. However, that only tells us part of the story. The call for new high schools in Dunfermline and West Fife has been a longer running issue that goes far beyond capacity and catchment.

“The reason for urgency is becoming more than acute at each of the schools as Inverkeithing, for example, is of a design that simply soaks up money to keep the building wind, watertight and in an acceptable state of repair”, these were the words of former Fife Councillor and now Dunfermline MP, Douglas Chapman in March 2015. Indeed, he was correct, yet nearly 3 years later we do not appear to have moved that urgency forward. Today I will outline the reasons why I would like to see Fife Council now move forward and produce regular feedback to both elected representatives and the public on where we are with addressing the school estate at three high schools – Woodmill, St Columba’s and Inverkeithing.

Whilst Councillors, rightly so, rejected plans to redraw catchment boundaries in Dunfermline which would have seen pupils from Masterton Primary School sent to Inverkeithing High School, we are left with a situation of uncertainty for many families and their children as it now seems pupil placing will be decided almost through a lottery. However, it should never have come to this point in the first place this has happened as a result of continued house building in the surrounding area. Without rezoning the roll of the school will continue to grow, potentially reaching 1786 by 2021, that leaves Fife Council with four years to reach a long-term solution and not continue to be; “tinkering around the catchment boundaries (which) will not solve the problem” as one councillor in this chamber has previously described rezoning as.

Around 8,000 new homes have been built around Dunfermline over the past decade, with a possible capacity crisis recognised by Fife Council in 2015 and only last month plans for an additional 220 in the Masterton Primary School area were announced. The 2001 census revealed, to put this into context, a population of 39,000 in Dunfermline by 2011 this was just over 49,000, climbing steadily to 55,400 by 2015 with a projected increase of 29% by 2026 according to the local strategic assessment by Fife Council. My understanding is that a further 12,000 homes are likely to be built in Dunfermline and West Fife over the next two decades – a great number of them will be family homes so it will be reasonable to assume that will mean more children and therefore, more school places will be required. House building and attracting people to Fife is great, but we need to consider the impact on the local infrastructure. House-building and new schools are recurrent and concurrent themes in Fife, only last week I was asked if the new Madras (which hasn’t even been built yet) would end up over capacity very quickly, I was able to reassure – using Fife Council provided data that no, that would not be the case but it does demonstrate the certain degree of cynicism amongst Fifers when it comes to house building and local infrastructure.

I would like to turn now to look at the school estate itself. Anyone visiting Dunfermline or Queen High School will be struck by the bright, airy buildings, the corridors and walkways that easily accommodate wheelchair users, the accessible toilet facilities on each floor and the classroom that have full Wifi access, IT facilities that work and are spacious and bright. They are modern learning environments. There is an absence of leaking roofs, classrooms that freeze you in Winter and cause the feeling of being trapped in a greenhouse in Summer. By contrast Woodmill, St Columba’s and Inverkeithing tell a very different story.

School estate in Scotland is rated according to condition and suitability, guidance set out by the Scottish Government. The Suitability Core Fact Sheet reads that:
“The Suitability Core Fact seeks to provide a measure of the extent to which a school building and its grounds are appropriate to providing an environment which supports quality learning and teaching and those other services provided to individual children and to the school community, in terms of practicality, accessibility and convenience.”
Why is Suitability assessed? Again, the Core Fact Sheet reads:
“The assessment is of the school as a whole, its buildings and its ground and of the impact these have on learning and teaching, leisure and social activities and the health and well-being of all users.”

Guidance does state there is no such thing as the “perfect school” and that buildings often reflect what was appropriate at the time of construction. The Core Fact Sheet makes it clear that the Disability Discrimination Act requirements must be dealt with under Suitability. “Building In Better Schools: Investing in Scotland’s Future” states in the Aspirations for the school estate that “schools are well-designed, accessible, inclusive learning environments” – we need to ask ourselves if in 2017 the three schools in question are just that.

All three schools in question are listed as category C for condition – “Poor – Showing major defects and/or not operating adequately (physical element does not carry out function effectively without continuous repair).” Even with seemingly continuous repair, as one former pupil of Inverkeithing High School said to me recently; “almost every time it rained there was a leak, with often just a bucket being put in place and I remember more than one window breaking as a result of the wind.” This was a pupil who left 2 years ago. Without producing a catalogue of complaints some feedback that I have received over the past few months in regards to all 3 schools includes; – there aren’t enough toilets/the toilets are cold and dark/classrooms are too cold in Winter and too warm in Summer/chairs are broken/blinds don’t open/ceiling tiles are loose/there aren’t enough computers and there is no Wifi access – that was from one pupil studying for an Advanced Higher. Home Economics and Science classrooms urgently need upgrading and whilst Dunfermline High and Queen Anne have full Wifi coverage in classrooms, Woodmill, St Columba’s and Inverkeithing do not.

I feel as if today I have produced a litany of gripes and complaints and therefore, I do want to make the point, that despite the poor condition and suitability, all three of these schools are performing well with dedicated teams of teaching and support staff and pupils who have continued to achieve excellent examination results. A new school estate though would give all pupils access to a learning environment that is fit for the 21st century and on par with the other 2 high schools in Dunfermline, it would also remove any possible developing capacity issues in the future.

Key to all of this of course is funding. Fife Council currently has £50 million set aside for the school estate in its Capital Budget and I have been informed that a further £100 million is required to move this forward. Previous programmes for new schools in Fife have included Building Fife’s Future initiative under which Dunfermline, Auchmuty and the Windmill Campus were built. £23million of investment from the Scottish Government’s £1.25 billion “Schools For The Future Programme” went into Levenmouth Academy. This ambitious project is scheduled to build 67 new schools by March 2018, unfortunately Woodmill, St Columba’s and Inverkeithing will not benefit from this. It would probably be prudent therefore, to consider that funding for new high schools in Dunfermline and West Fife will have to come about from the Scottish Government.

Last month I stated at the Education & Children’s Services Committee following rezoning proposals being put back a year that we have to start seriously thinking about new schools for Dunfermline. Interestingly Cllr Sinclair said something similar almost two years ago; “I have repeated my plea to the Administration to stop palming off pupils and parents in Dunfermline and actually put forward plans so that we can get funding to deliver these school buildings.” I would therefore ask the Administration to do just that, lets move the plans forward and begin the process in January 2018 and provide elected members with regular reports on the status of progress developing a new school estate for each of the three schools discussed today.