New Schools For Dunfermline - Lets Talk About It

Fife Conservative Councillors, Kathleen Leslie & David J Ross are bringing a Motion to full Council this Thursday asking the Administration to address the need for new high schools in Dunfermline and West Fife.

Cllr Leslie said: “Before the local elections both Labour and the SNP spoke out and indeed blamed each other for not addressing the need for new high schools. Now we are hearing a deafening silence. Woodmill has a looming capacity crisis and all three schools are listed as category C in condition – this means that the school estate itself is considered to be ‘poor and showing major defects’”.

Cllr Ross added: “Last month plans for an additional 220 houses near Masterton Primary School were announced by Fife Council and over the past decade around 8,000 new homes have been built in the area. Where are all these children to go to school? Additionally, we want youngsters to be educated in buildings that are fully accessible and inclusive for all. Woodmill does not have full disabled access and Inverkeithing High School is listed as Suitability Rating C.”

The Motion before Council on Thursday asks for a full report on all options for three new high schools in Dunfermline and West Fife, and in addition quarterly updates on the status of each option.

“There have been available funding streams in the past for new high schools, including Dunfermline and Queen Anne High School whilst the new Levenmouth Academy received £23 million in Scottish Government funding. The Education Secretary has spoken of the need for young people to be educated in world class schools. Now is the time for Fife Council’s Administration to begin that process in Dunfermline and West Fife,” stated Cllr Leslie.

Our Press release has been published this morning. Please find the link here - http://www.dunfermlinepress.com/news/15768813.Call_for_action_on_new_schools_for_Dunfermline_and_West_Fife/

This week Fife Councillors will come together for the final Full Council meeting of 2017. For a new Councillor like myself, the past few months have been a huge learning curve - something I want to talk about but I will keep that for a later post.

On Thursday I will put a Motion to full Council asking for the status of the school estate in Dunfermline & West Fife to be addressed. In that I refer to the need for three new high schools in the Dunfermline area. This is a long running issue and one in which I have spoken of on previous occasions on this site and in correspondence to local media. I made the decision to bring this to the final meeting of the year as it has become my belief that whilst the Administration do want to address the need for new schools in Dunfermline and West Fife, now that they are in a shared administration the calls of the urgency for this (along with the endless SNP/Labour "lets blame each other for nothing progressing on the school estate") have gone silent. Labour can no longer shift the blame to the Scottish Government now they are in the pocket of the SNP in Fife and the SNP can no longer shout that a Labour Administration in Fife is hopeless/useless/inept as they are their partners.

Whilst the silence has deafened us all I have continued to push the question, whether it be on here, in the media or tacitly at the committee level where I have seen an opportunity to mention it.

Last Thursday the Dunfermline Press headline read that Woodmill High School would now be potentially 70 pupils over capacity and that pupils would find out where they would be placed almost through a lottery. I absolutely stand by my decision to support the proposed amendments to rezoning - which as a result has pushed all rezoning back by a year. A longer more thought out approach is required, one which will come back to Committee in the new year. 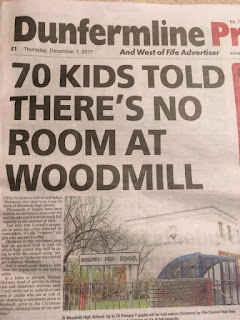 Myself and Cllr David J Ross had a letter featured in the same copy of the Dunfermline Press where we pressed the case for new schools - capacity and catchment is only one part of this argument - which I will be discussing further on Thursday but we also have to address the need for a school estate fit for the 21st century.

The wording of the Motion to Council reads:


"That Fife Council Education Directorate be asked to provide a report to full Council on all options available to fund three new high schools in Dunfermline & West Fife and produce a quarterly report on the status of each option.”
Proposed by Cllr Kathleen Leslie
Seconded by Cllr David J Ross 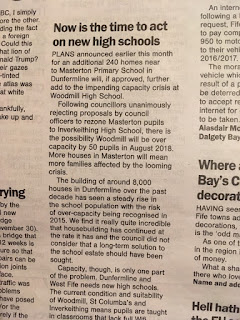 "Now is the time to act on new high schools" 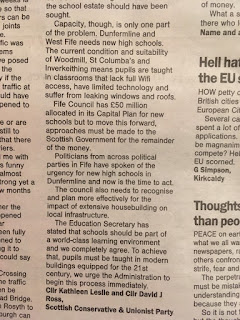 "Plans announced earlier this month for an additional 240 homes near to Masterton Primary School in Dunfermline will, if approved, further add to the impending capacity crisis at Woodmill High School. Following councillors unanimously rejecting proposals by Council Officers to rezone Masterton pupils to Inverkeithing High School, there is the possibility Woodmill will be over capacity by 50 pupils in August 2018. More houses in Masterton will mean more families affected by the looming crisis.”


The building of around 8,000 houses in Dunfermline over the past decade has seen a steady rise in the school population with the risk of over-capacity being recognised in 2015. We find it really quite incredible that house building has continued at the rate it has and the Council did not consider that a long-term solution to the school estate should have be sought
Capacity though is only one part of the problem. Dunfermline and West Fife needs new high schools. The current condition and suitability of Woodmill, St Columba’s and Inverkeithing means pupils are taught in classrooms that lack full Wifi access, have limited technology and suffer from leaking windows and roofs. Fife Council has £50 million allocated in its Capital Plan for new schools, but to move this forward, approaches must be made to the Scottish Government for the remainder of the money.
Politicians from across political parties in Fife have spoken of the urgency for new high schools in Dunfermline and now is the time to act. The Council also needs to recognise and plan more effectively for the impact of extensive house building on local infrastructure
The Education Secretary has stated that schools should be part of a world class learning environment, and we completely agree. To achieve that pupils must be taught in modern buildings equipped for the 21st century, we urge the Administration to begin this process immediately."