In Touch - Update - What Have I Been Doing

I will begin this with apologies to my regular readers, some of whom have contacted me to ask what has happened. There have been a few reasons for my absence on here, one of which is family related, however, having not only missed writing I realise that others have missed my ramblings/rants/thoughts/opinions. In short, I have a voice and I intend to use it.

I was elected to represent local people and speak for them and also to represent a political point of view. There can be few (I would very much hope) elected representatives who do not see it as a priority to speak up and speak out and although speaking out can be controversial it is something that anyone in a position to do so should do. Being elected also means to stop and listen - to listen to the voices of those who put us there and remember we are there for them. We are not there to preen our own ego and bask in our success at the ballot box - that, in my opinion, would be a failing of duty. In the words of Britain's greatest leader, Sir Winston Churchill: "Courage is what it takes to stand up and speak; courage is also what it takes to sit down and listen".

In this post I am going to put my constituents back "in touch" with what I have been doing this past couple of weeks. The first is the NHS and what is worrying me greatly. As stated above I have had an ongoing family related matter with an elderly grandparent and whilst I cannot in anyway fault the wonderful staff at the Victoria Hospital in Kirkcaldy where she had to spend a night I was absolutely struck by the shortage of staff on the ward. She was held within the admissions unit rather being transferred and on more than one occasion I had to actively seek out a nurse and then a doctor - I walked along corridors with patients lying in side rooms but very few visible staff. The second experience of the NHS this past week has been with my sister who following suffering serious headaches and dizziness went to the A&E at the Queen Margaret Hospital in Dunfermline - the hospital that has been stripped bare of many of its functions by this SNP Government, where there was no doctor on duty. She was examined my a nurse who advised a trip along to the Vic due the concerns from my sister's description of her symptoms. Upon arrival at the Vic she sat for 3 hours to then be asked a series of questions by a nurse who then told her he would "have a chat with my boss" and returned a few minutes later to state she would not be seen by a doctor but did she live with anyone. My sister answered yes, indeed she did. At which point she was given a pamphlet to read on head injuries and advised to let her husband read it too in case she displayed any symptoms such as convulsions or passing out. Is this what our NHS has come to? Diagnosis by description not observation? The Scottish Conservatives are currently running a "Save Our Surgeries" campaign which is focusing on the reduction in GP services over the past decade (since the SNP came to power). A 6% fall in GP practices combined with a 12% increase in practice lists over a 10 year period - simple Maths will tell you that something is seriously amiss there. Just as with other public services the SNP has presided over a decline in service provision that is impacting every single day at the ground level. I am keen to hear from residents within my Ward on how they feel GP provision is - waiting times and follow up times for hospital consultations - do please get in touch. This link provides further information on Scotland's GP services under the SNP - http://www.scottishconservatives.com/2017/10/snps-health-record-fewer-gp-practices-larger-patient-lists-longer-waiting-times/ 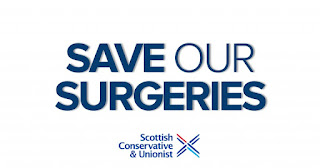 I have also been out and about with the ongoing issue of littering and access around the Invertiel Viaduct. I am very pleased to report that, as promised, the school organised the Community Payback Team to clean up the area at the viaduct where the worst of the litter was - it looks so much better! Now, we just need it to be maintained. I have made an earlier plea about the need to recycle waste, and in particular - plastics. Much of the rubbish lying about was empty water and juice bottles that pupils had been throwing away on their return journey to the school after lunch. The Tenants and Residents Association (TRA) and myself have now made the suggestion that we meet with school prefects to  get them on board in reminding the younger ones to put rubbish into the recycling bins but also to stop them using the route by the viaduct as a shortcut. Last Friday I went with two representatives of the TRA to the school and with staff we headed out (wearing wellies, thank goodness!) to look at the route pupils take. Not only is it incredibly muddy (and I mean some serious mud, my wellies were caked in it) but it is dangerous, I shudder to think how they negotiate the route on a rainy day. 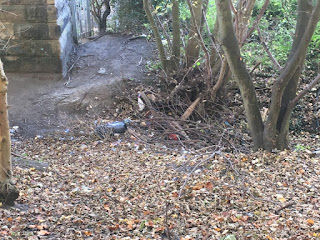 Thanks to the Community Payback Team the area looks a lot better. Now the challenge is to ensure it is kept like that. Reduce. Reuse. Recycle. 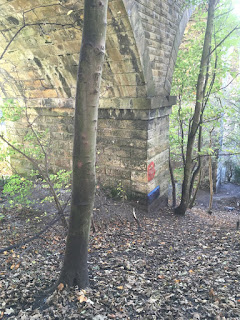 The fence, as I have now discovered does not even begin to close off access at the second arch of the viaduct. I struggle to understand how this was ever allowed to go ahead.

We have also noted that the £2,000 that was provided for the fence has been a complete waste of money. The fence not only was too short at one section of the viaduct (again, see my earlier article) but there is a whole other section of around 20 metres that would need to be fenced off to even begin to address the issue and even then the lack of fence around the school perimeter means another route would be easily found. I believe key to this is breaking the habit. This is why I am really keen to have senior pupils involved and to meet and speak with local residents who are being affected by littering - we all have a role to play in keeping the environment clean, safe and respected. I believe this would be a great opportunity for some positive interaction and fostering of good relations for the future between the school and local community. Please see link - http://www.kathleenleslie.co.uk/search/label/Recycle%20-%20Neighbourhood%20Clean%20Up%20-%20And%20The%20Fence%20Anomaly

I also attended the Burntisland Castle Neighbourhood Development Plan (NDP) group just over a week ago - I really enjoy these meetings. The interaction and opinions of residents certainly keeps us councillors on our toes! The Castle NDP have been working hard to give residents a voice and to bring things to the local community that local people want and need. One particular issue that has been long running is speeding along the Haugh Road and the need for speed reducing measures. Residents voted back in September that with some of the funding money received they would like to see speed bumps installed, finally these are to be given the go-ahead. Although this was not a project I was involved in from the beginning I am very keen to see them continue to excel and engage within the community. I have also been informed this week by the community police that 20mph signage along the Haugh Road is minimal - taking a drive along today I noted you have to be around 200m along the road before a small "20" notice appears on a lamppost and there is no signage on the road. I have taken some photographs and am asking Council Officers to have this remedied.

The Youth Action Group also spoke of ways to try and engage with young people in the town and are working to have a youth café up and running (on a Friday evening, I believe), their energy and enthusiasm is something we all need to reflect upon. Both in all my years of teaching and this past few months as a councillor I have heard, albeit from only a few people, that young people are seen to be causing problems and trouble within sections of local communities and whilst there is no denying there are issues, the youth group in the Castle demonstrates how that energy can be harnessed and focused and I look forward to seeing how their group evolves and develops over time.

Last week Reform Scotland held a one day conference in Edinburgh entitled "How Does Scotland Compare With Other Countries: Can School Governance Reform Make A Difference". Speakers included the Education Secretary as well as a representative if the OECD - this is a long topic so isn't for this post and as I am currently working on a piece of work relevant to this there is no need to detail it any further at this stage. However, last week's conference provided members of the audience with much to take away and digest, it was also a great opportunity to speak to people from many different fields of work and experience. 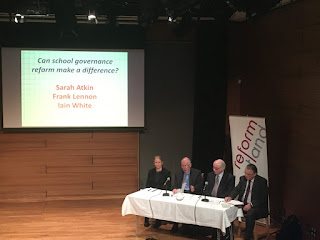 Finally, this evening I attended Kirkcaldy West Community Council where a representative of Fife Coast and Countryside Trust brought to the agenda a proposal to look at a joint initiative with Kinghorn on exploring and promoting the "Kinghorn - Kirkcaldy Geological Trail".  As the name suggests it would provide walkers, tourists and locals with information on Fife's ancient (325 million years ago, to be precise...) past and the many rock formations and fossils that can be found. The potential for this project is enormous and could also provide a great natural learning environment for local school children to visit. More information can be given by emailing: geoheritage@btinternet.com 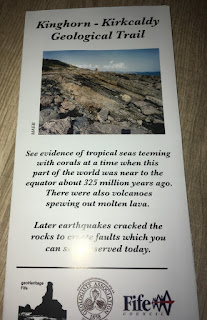 Tomorrow I am off to another conference and and then to get in touch with a number of people at Fife Council to follow up residents enquiries and push for updates on matters I have requested information on. 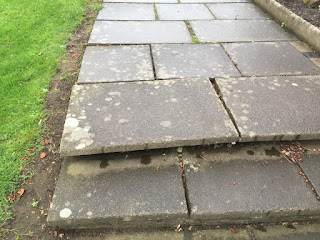 A resident spoke to me about a loose slab on the pavement that could be a potential hazard - this gets reported to Fife Council - remember this is the sort of thing you contact your local representative to act on.

My contact details can be found on this page if any constituent has a matter they would like to discuss.

Email ThisBlogThis!Share to TwitterShare to FacebookShare to Pinterest
Labels: In Touch - Update - What Have I Been Doing