In Touch - This Week

The Week - A Beginning
This week has been busy! Sunday was the unveiling of the Victoria Cross Centenary Stone in Kinghorn which you can read about - http://www.kathleenleslie.co.uk/2017/11/today-centenary-victoria-cross-stone.html . I cannot help but think more has to be done to push and publicise the rich history of Fife and many of its smaller towns and villages. Over the past few weeks I have visited sites that would not feature on any "tourist trail" as such but are of huge historical significance and for the erstwhile traveller and lover of history they are gems worth visiting. Fife gave the world Adam Smith and Andrew Carnegie but it has so much more.There is extensive royal history around Fife, both pre and post Union of the Crowns, there are geological finds along the coastline between Kinghorn and Kirkcaldy, and there are ancient churchyards and burial sites (pre and post Reformation) that could possibly date back as far as the 6th century.

Kirkcaldy Area Committee - Littering
Tuesday was the Kirkcaldy Area Committee. There are 12 elected representatives on this committee - covering 4 wards. A number of significant updates were presented to councillors on local matters across the Kirkcaldy Area. Littering was on the agenda and efforts to tackle it. Enforcement officers are clearly hard at work both in monitoring areas around schools at lunchtimes to ensure litter is binned and also in chasing up dog fouling culprits. I brought to the attention of the Committee the ongoing litter problem around the Invertiel Viaduct and asked if Officers would continue to monitor. I did also state I recognised that, due to feedback from residents, that the problem had certainly been in part reduced (I shall cover that further on in this post). Unfortunately the media coverage only reported my concerns and not my recognition that the matter was being addressed and somewhat effectively. Link to coverage in the Fife Free Press - https://www.fifetoday.co.uk/news/environment/abandoned-cars-litter-and-dog-fouling-still-on-the-agenda-but-there-have-been-fewer-complaints-1-4627161 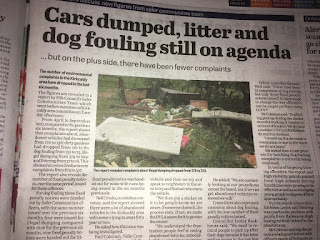 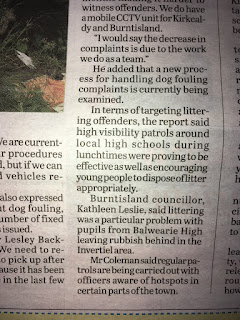 Kirkcaldy Area Committee - Policing
A report was presented to Committee by two Police Scotland officers, covering anti-social behaviour, 101 calls and CCTV work with communities. Concerns raised at the Community Engagement Meeting in Burntisland earlier in the month were in regards to 101 calls and their being logged - find the link here - http://www.kathleenleslie.co.uk/2017/11/in-touch-this-past-week.html . Following that meeting and points raised the week before at Burntisland Community Council I had asked how 101 calls were being logged, I did this once again at the Area Committee. There is a concern (which I am not wholly convinced has been answered) that if one person in a neighbourhood is making several 101 calls of an evening then this is only recorded as one "incident". Police officers assured me that was not the case and that all are logged. I also asked about the mobile CCTV van, of which there is only one of in Fife. This was more of a probing question due to the non-transfer of operational responsibility for CCTV when Police Scotland was established (again see my previous post). My feelings are this needs investigated further and I intend to pursue a couple of aspects of policing in Fife - watch this space for an update. On a positive note, crime statistics across the Kirkcaldy area are down and continued engagement with youngsters is proving positive in reducing some aspects of youth anti-social behaviour. 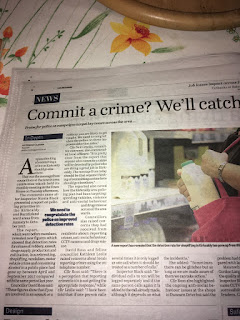 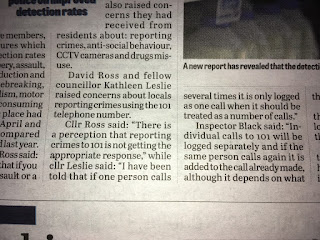 Are 101 calls being appropriately logged or are positive statistics paramount?

Invertiel TRA
Tuesday was indeed a busy day as in the evening I attended the Invertiel Tenants & Residents Association. I always enjoy these evenings, there is a real sense of community and a desire to get things done that work for everyone. The ongoing litter around the viaduct was covered with a general consensus that the problem has been greatly reduced (see my earlier link - http://www.kathleenleslie.co.uk/search/label/Recycle%20-%20Neighbourhood%20Clean%20Up%20-%20And%20The%20Fence%20Anomaly ). Perhaps the clean-up in October and a visit to the school has meant that pupils are being more actively discouraged from using that route as a short cut. Given the treacherous conditions of much of the route they were taking I really do hope they have stopped using it. It has been decided that rather than have a further meeting with the school, to engage with the community, before Christmas it would be better to wait until the new year.  Link to coverage in the Fife Free Press - https://www.fifetoday.co.uk/news/crime/police-say-crime-detection-rates-rise-1-4627220

A Positive News Story - Keep Those College Places
Last week students at Fife College who were in their first year of a two year HND in Practical Journalism were informed that the second year would not run. This left students in a very worrying situation whereby they had signed up for a two year course, with the second part leading them to work towards exams in achieving the NCTJ qualification - which much print media employers would be looking for, not running. An option of completing the course is apparently available through a link with Sunderland University. However, not all students have the means or the time to do that. I intially wrote a press statement expressing my deep concerns about the proposed demise of the course but was, happily, able to update that when the programme was given a reprieve. 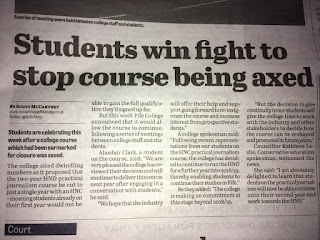 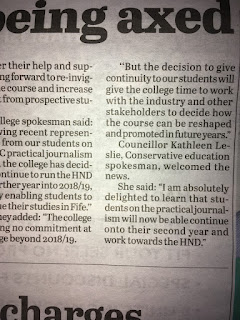 My full quote to the media read as follows:

“I am absolutely delighted to learn that students on the Practical Journalism will now be able continue onto their second year and work towards the HND. Without the second-year students would not have had the opportunity to gain the NCTJ qualification which most print media are looking for when hiring.
Students from around Fife and Scotland believed they were setting-out on a two-year course and for them to have been told at this stage in the year that they would not be able to progress caused a great deal of uncertainty and was quite simply unacceptable.
Going to university is not the choice of many prospective students in Scotland and excessive cuts to college places in recent years, by the Scottish Government, has left fewer options available. Fife College has guaranteed this course for the 18/19 academic year, but what about beyond that? More funding has to be put into both continuing current courses and developing new college places for students in Scotland.”

The link to the Fife Free Press online article can be found here - https://www.fifetoday.co.uk/news/students-win-fight-to-stop-course-being-axed-1-4624628

Being Interviewed - Burntisland Railway Station
Unrelated to that I had met with a journalism student around the same time who wished to interview me about disabled access at Burntisland Railway Station. I was more than happy to take part in this as the lack of access is deeply concerning. There are five railway stations in Fife which do not have full disabled access and when I investigated Network Rail's Access For All Fund for station upgrades none of those in Fife are in line for funding. The lack of access is of concern to my two ward councillor colleagues and we shall continue to pursue a solution. In the meantime I absolutely encourage anyone experiencing accessibility issues at Burntisland or Kinghorn to please contact me - I want to hear from you. 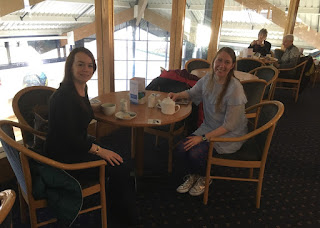 Not only interviewed but filmed and interviewed - needed some quick thinking on my part! Thank you for taking the time to speak with me. Lack of accessible station platforms must remain on the agenda

We Work For You - Councillor Leaflet
Despite the chilly weather conditions I have been out and about delivering my councillor leaflet which lets people know what I am up to and also gives residents the opportunity to contact me with anything they wish to be addressed. If you are unsure if it a matter for an MP, MSP or Councillor do please still get in touch and I will direct you if necessary to the relevant representative if it is not a Council matter. Thank you also to those who have already been in contact via email and 'phone.