In Touch - This Past Week

As I am trying to place regular updates on here this post is some information on what I have been doing over this past week.

Remembrance Sunday
Sunday November 12th started off with the Remembrance Day service at the Kirk by the Sea in Kinghorn. It was a cold and breezy November morning and the church service included a short and very moving interview with surviving Second World War, former POW,  Arthur Gunn. His story was a reminder from a veteran of all they had gone through in a war that claimed millions of lives. A short procession to the War Memorial after the service and wreaths were laid by the RNLI, local groups and then by myself on behalf of Fife Council, something which was a great honour for me. Like countless families across the UK I have grandparents and great-grandparents who served their country in both the First and Second World Wars, with my parental great-grandfather being stationed at the Kinghorn Battery during the First World War.

In just over a week's time Kinghorn will mark the centenary of John McAulay who was awarded the Victoria Cross for his role in the Battle of Cambrai. A service will be held in the town which will see some of his descendants attend. 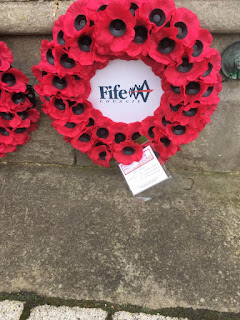 I laid the wreath on behalf of myself and the 2 other Ward 9 elected representatives. 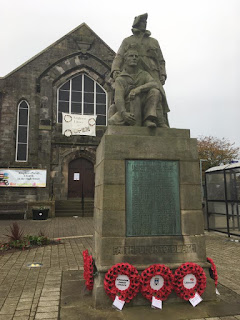 
Bi-Fab
Last week was a very difficult and worrying week for employees at BiFab which employs over 1,400 staff (a mix of permanent and agency) across Burntisland, Methil and the Isle of Lewis. The engineering firm was on the verge of administration last week leaving hundreds of Fife workers with uncertainty about their future. Bi-Fab is currently working on a contract for the Beatrice Offshore Windfarm - the renewables sector being one which the Scottish Government has been keen to promote. The Scottish Government offered a loan if required and the UK Government made it clear they were ready to stand with Edinburgh in offering support. Thankfully a deal to conclude the contract between Seaway Heavy Lifting and JCE Offshore (partners to Beatrice Offshore Windfarm) was reached and work is guaranteed until next April. Local elected representatives will be watching this closely, workers do not need more uncertainty in the lead up to the festive period. I was interviewed by BBC Scotland News and commented in local paper, The Fife Free Press, expressing my concerns and urging for a solution to be found. 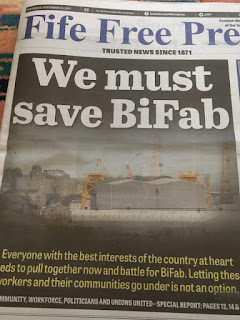 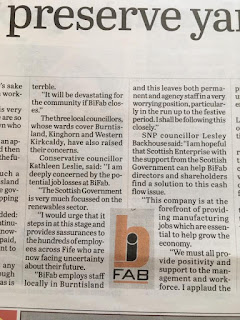 "I am deeply concerned by the potential job losses at BiFab. The Scottish Government is very focussed on the renewables sector. I would urge that it steps in at this stage and provides assurances to hundreds of employees across Fife who are now facing uncertainty about their future.
"BiFab employs staff locally in Burntisland and this leaves both permanent and agency staff in a very worrying position, particularly in the run up to the festive period. I shall be following this closely."

Catchment Area - Dunfermline Schools
Anyone who has been following this blog will know that I have written quite a bit about school catchment and rezoning in Dunfermline. Following rejecting proposed catchment changes back in the October meeting of the Education & Children's Services Committee (see link - http://www.kathleenleslie.co.uk/2017/10/we-people-elected-representatives.html )
this month's meeting set out a timeline to bring new proposals to the table. The situation now is that Woodmill High School will potentially be 50 pupils above capacity, however, I would consider that number is likely to be lower due to placing requests. I have stated throughout this that there are two issues here:

1. Poor planning - extensive house-building throughout the previous Administration led to an understanding their would be a capacity issue (this was recognised as early as 2013) and therefore, this sudden rush to rezone. Plans for an additional 240 homes in Masterton have been released this week. If you are going to build houses there has be sufficient and competent local infrastructure in place.
2. Dunfermline needs new high schools - it is not only capacity but also the condition and suitability of Woodmill, St Columba's and Inverkeithing High School. There is £50 million set aside in the Capital spend for new high schools but the remainder of the money has to be sourced from the Scottish Government. Prior to May's local elections the SNP and Labour were very keen to blame each other in their demands for new high schools. Interestingly both have become deafeningly silent on the need for new schools which is why I made a deliberate point to mention it at Committee earlier this month, a comment that was picked up by local media.

The Education & Children's Services Committee meets again in January when the timeline for rezoning will be on the table again, we await to see. Meantime I will continue to push for and investigate further information for seeing a proper discussion and way forward for high schools in Dunfermline. See the links to the narrative on new high schools: 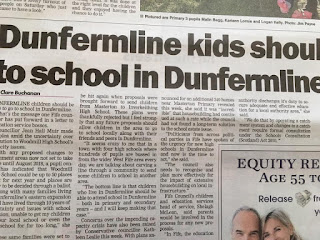 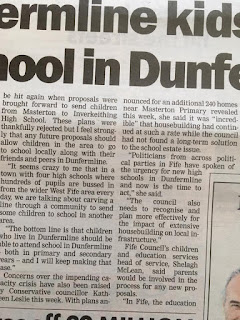 "Politicians from across political parties in Fife have spoken of the urgency for new high schools in Dunfermline and now is the time to act. The council also needs to recognise and plan more effectively for the impact of extensive housebuilding on local infrastructure."

Policing
Last week I attended the regular Police Community Engagement meeting in Burntisland, being the last of its kind to still run in Fife, I have been informed. Anti-social behaviour was high on the agenda with me asking questions about youngsters drinking and causing a disturbance at the Castle area around the Haugh Road on a Friday evening, in particular. Youth anti-social behaviour has been a long running issue for residents, not only in the Castle but across the town (and to a wider extent at various pockets across Fife) and whilst I absolutely must stress this is only a very small minority the distress it can cause to residents can be long lasting and impact on their health and well-being, particularly in areas with older residents. Projects, with success, have been run in the Templehall area of Kirkcaldy which have included football and have involved the community police with the result being a fostering of better relations and a reduction in anti-social behaviour. Now a session has been organised in Burntisland to run on Wednesday December 13th at 6pm at the Beacon Leisure Centre, it will be run by the YMCA with youth workers and the police - do come along and give it a go. Whilst, I believe, everyone recognises you will never be able to catch the attention of all those who are contributing towards anti-social behaviour, I do think this can and does make an impact and the knock on effect in communities means that trust can be built between the police and local young people. 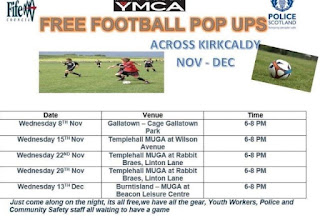 What concerned me the most though was that if one person calls 101 to report anti-social behaviour or other ongoing concerns is if that person calls back later in the day/evening on what is considered to be of the same/ongoing incident that is only logged as one report on the "call card". This troubles me a lot as quite often in a neighbourhood there will be that one person who others will turn to who, often, by default taken on the role of their voice but if that one person makes all the calls it is once incident. In short if you want 5 complaints/concerns logged (and thus, creating more likelihood of a rapid response) you need 5 different individuals to call!

Police numbers have suffered greatly under this Scottish Government who centralised all policing in 2013 - thus merging regional police forces who had far greater local knowledge. Frustration has been voiced time and time again about residents having to call a central call centre and then have to actually explain where they are as that link between police and community has been severed. All of the community police that cover Ward 9 are doing an exceptional job but as they themselves have pointed out, 60% of what they do is not crime related and with a focus on Kirkcaldy, smaller towns such as Burntisland and Kinghorn do not always have the coverage of policing they need - particular on weekend evenings.

Centralisation of Scotland's police has come at a high cost, a Freedom of Information request obtained by the Scottish Conservatives shows that since April 2013 there have been 1,426 men and women leave the police. Further concern is that the number of discontented staff working for the single force has resulted in one in three wanting to leave within three years and, most worryingly, 3159 have left since the April 2013. This does not make for good reading and when attending meetings such as the Community Engagement one and listening to the very real worries and concerns residents have it does make me wonder what the future holds for our already embattled single police force and of course the widely opposed merger of the British Transport Police with Police Scotland. It all highlights this government's obsession with centralising services and wresting control away from local people and communities.

Round-Up
My first "In Touch" leaflet as your Ward 9 Scottish Conservative & Unionist Councillor has begun to be delivered so expect one through your letterbox over the next few weeks. There is lots of information on what I have been working on across the Ward and at Fife Council and also a small survey on the back where you can write to me with any areas of concern that you would like addressed. Alternatively I can be contacted via email or 'phone - see details on "About Me" page on this site. 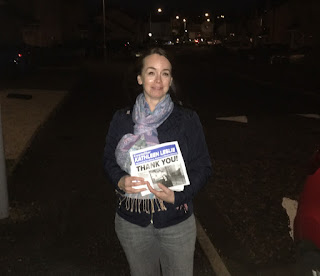 One other remark from this round-up of news is at the Education & Children's Services Committee this month committee members heard the 2 Youth Parliament representatives speak on the ongoing matter of teaching vacancies and recruitment across Fife. They were asked what they thought may be barriers to young people taking up teaching as a career. Elected representatives heard a list of reasons which included workload, pay, treatment of staff by pupils and stress. I felt that they echoed concerns that teachers themselves have often spoken of. However, I would add to their thoughts by saying that yes, it is laden with bureaucracy and often there is a lack of support, but it can also be a highly rewarding profession that can leave a conscientious teacher with a feeling of - they did make that  difference to a child's life. They did make that positive contribution. Therefore, I would say that despite all the ongoing issues with curriculum, governance and bureaucracy, if it is what you want to do and feel you have something to give then go for it. All too often we become bogged down in the negative (on pretty much all topics) but sometimes lets look at the positives too...

Email ThisBlogThis!Share to TwitterShare to FacebookShare to Pinterest
Labels: In Touch - This Past Week