Recycle - Neighbourhood Clean Up - And The Fence Anomaly

Indeed, that is an unusual title for a blog post, an unusual title, full stop. However, I want to touch on a couple of issues here in regards to recycling and the responsibility of everyone. Secondly, there was coverage in yesterday's Fife Free Press over concerns expressed by both myself and Invertiel Tenants and Residents Association over the long running issue of the route by the viaduct being used as a shortcut by school pupils at lunchtime.

Under the viaduct at Invertiel there is an area of woodland, it is a fairly quiet area, there are houses on both sides of it and cutting across the road will take you into the woods behind Invertiel. Aside from the regular Fife Circle train service rattling across the viaduct, once you climb up, the somewhat hazardous slope,  it is peaceful and secluded. An area where you would expect much wildlife to exist in fairly tranquil surroundings. However, all is not as it seems. Turn the corner and you are confronted by this !! - 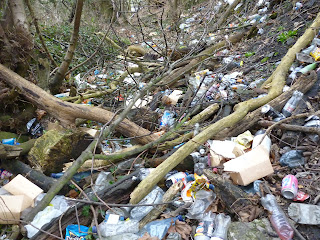 I struggle to find the words to sum up how I feel about all this discarded plastic - mainly in the form of juice bottles. Plastic is not biodegradable in this form. It will not break down, instead it will just lie there. Look at the area - trees, that provide a whole habitat for wildlife, all the insects and small woodland animals are going to be in amongst that. Not to forget that given the abundance also of sandwich boxes, sweet wrappers and crisp packets, it will attract rats - and the area is very close to houses.

Here are some of the causes of death and injury to wildlife due to plastics and other waste being discarded:

* Small animals can climb inside plastic bags and suffocate or they can become wrapped up in them and choke
* Cans (such as drinks cans) often have sharp edges which can cut and injure small animals
* Glass (there isn't so much glass here) can cause injury and death - often through suffocation as small animals, with an instinct to smell objects closely, can become trapped in the neck of the bottle.
* Animals will often, as they scavenge for food, eat plastic wrappers which slowly kill them

In an effort to prevent the school pupils using the viaduct as a short cut it was agreed, a number of months ago, to look at constructing a fence to block off access. Reading through the correspondence (from the previous group of councillors) it appears to have been agreed with the Safer Communities team that the area would be cleared up, the email reads:

"the land in questions comes under council ownership, the largest area directly behind the school comes under education, having been on site it is clearly a health and safety issue."

Indeed it is. Therefore, why was a fence then constructed whereby none of the litter was picked up beforehand and secondly the fence does not block off access? Here is a picture of the fence - 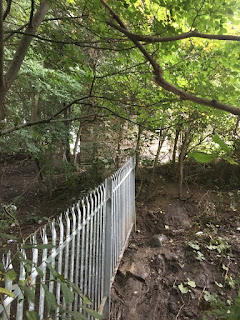 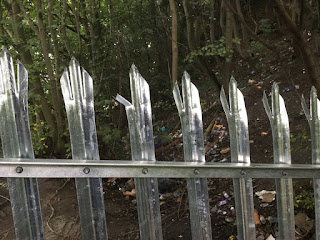 Whilst previously pupils from the school were using the area to the left of the fence they are now using the area to the right of the photo - the idea of the fence was to block off access - completely.
That has not happened simply because the fence ends far short of the viaduct wall. The pupils simply use the other, more dangerous in my opinion, side of it. The litter of course being piled up on either side. Additionally, the fence has sharp spikes along the top of it, the potential dangers those present do not bear thinking about.

Invertiel residents were keen to have a litter pick up but now, due to the fence, that is not possible from a health and safety point of view. They would have to carefully climb up the slope on the right hand side, cut across and then head down the other side of the slope to gather the litter. An idea had been considered by the previous head-teacher that a pupil group could be involved in any clean up. I would have strong reservations about that though given the access to the site. Whilst pupils are using the route as a short cut at lunchtime, we should not be actively endorsing them to enter into an area such as this given the potential hazards. The bottom line is, the area should have been properly cleaned prior to the fence being put in place and the fence should have been designed to stop access altogether.

The issue will be discussed further at the next Invertiel Tenants and Residents Association and it is hoped the school will engage fully in the process to seek a solution. Fife Council must also have a role to play in this as they transferred the money over to the school to oversee the completion of a fence.

Meantime, I would absolutely urge people not to use the area as a short cut and on a wider note - please really consider the wider implications of dropping litter, particularly plastics, cans and glass. We all have a role to play in protecting and maintaining and cultivating our local environment and wildlife habitats. Recycling is something we are more than well aware of and if you can't immediately find a recycling bin, then carry your plastic bottle until you find one.

On a more positive note the Fife Council Administration, has this week announced it will be setting aside £1/4 million to "deep clean" parts of Fife that have been neglected and overlooked. I absolutely welcome this move and look forward to it getting started. http://www.fifetoday.co.uk/news/environment/1-4-million-dirt-busting-team-set-to-deep-clean-fife-1-4566937 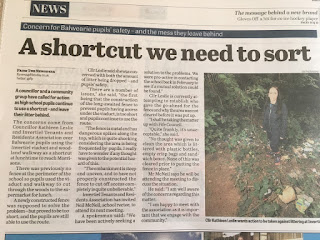 Email ThisBlogThis!Share to TwitterShare to FacebookShare to Pinterest
Labels: Recycle - Neighbourhood Clean Up - And The Fence Anomaly