The Great Question of Seagulls

Seagulls. Now where do I begin? This might seem a rather unusual topic to be writing about, but as I have discovered over the last few weeks the prevalence of seagulls around parts of my ward are a major point for discussion.

Essentially the situation is this; the seagull population appears to be multiplying and the seagulls appear to be becoming bolder and more aggressive. Only last month a Fife woman who was walking her son's dog in Kirkcaldy was hospitalised following being attacked by an aggressive seagull.
Subsequently calls for some measures of control of the birds have been called for. These have ranged from removal of eggs to an outright cull of the birds.

Many towns along Fife's seaside coast have been affected by the number of seagulls arriving during the summer months. The birds themselves are natural scavengers and will go where there is human habitation and a source of food. It is the source of food that concerns me. I know this is limited to an absolutely tiny percentage of people, but there are people who are feeding the gulls or have done so in the past and this all adds to the attractiveness of seaside towns for the birds. Summer, fish supper, not enough bins (I will come to that in a minute) and seagulls - not a perfect combination.

Additionally, in some places there are not enough bins, something I am attempting to get the Council to address - and here is a plea - please ensure you bin your rubbish and if the litter bins are full - contact Fife Council and let them know - or contact myself or one of your Ward councillors and we will get onto it. All rubbish needs to be binned and that includes food waste. Litter of any kind never looks good, again this is a tiny part of the population, but please ensure your rubbish is binned.
Next point - do not feed the gulls - yes, obvious, I know. However, I know of at least one person where I stay who does actually do this. Whilst feeding the wee birds, especially during their nesting season and the long, cold winter months, is important, please ensure that feeders are designed for the smaller birds. Don't just throw food out onto the grass the smaller birds will not eat large chunks of bread anyway (bread is not good for the digestive process of any bird) - it is the seagulls and crows who will scavenge for the bread.

Now, culling? This has been suggested. In practice though I cannot envisage how it would work. Culling a few of the "ringleaders" (as some have suggested) is unlikely to remove them from towns and in itself opens up a whole nest (no pun intended !) of other issues as to method, safety measures and deciding which birds to cull. I am generally very opposed to any sort of culling of wildlife and cannot take a stand in supporting this gull, particularly when I feel the birds are a part of the character of seaside towns - and that, as I have mentioned, I do not believe it would solve the problem.
More humane methods can and should be looked at and it is something I believe the Council is going to have to address as this is not the first summer this debate and discussion has started up.
Anyway, here are my thoughts - which appeared in the local paper, the Fife Free Press, this week.
Kathleen


Sir
Over the past number of weeks, the question of seagulls and a potential cull have been talked about widely and been cause for much debate in seaside towns around Fife. I have never been particularly in favour of the culling of any form of wildlife and therefore, have been instinctively opposed to a cull. Gulls are a natural feature of any seaside settlement and during their breeding season we are going to see an increased number of them. Gulls, as I have discovered from the various pieces of research forwarded to me, are highly adaptable birds and they will go where there are favourable sources of food and breeding grounds. How then do we tackle this?
Netting, spikes and wiring can be placed around areas where they are likely to nest, thus removing the likelihood of a whole family of them settling in for the summer. Secondly, and obvious as this may seem, it is imperative people do not feed the gulls, as natural scavengers this will only invite more of them to turn up. Whilst many of us enjoy feeding the smaller birds that come to our gardens, ensure that bird feeders are such that larger birds like gulls cannot access them. Don’t throw bread out and don’t throw the remains or your fish supper onto the ground for the gulls to clean up. Fife Council also has a role to play, more gull-proof bins need to be installed along high streets and seafronts where there is likely to be food consumed.
As with so many things, education is the key here. I would like to see projects such as the Tag-n-Track one that is run by Clyde Muirshiel Regional Park whereby gulls are tagged and people can follow their journeys. The park is also going to be running workshops for school children. Surely this is the way forward rather than a knee jerk reaction in wanting to cull the seagulls? Culling rarely, if ever provides a long-term solution. 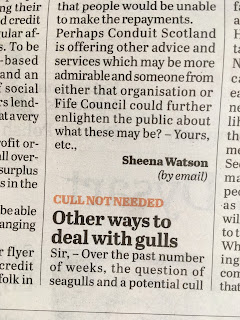 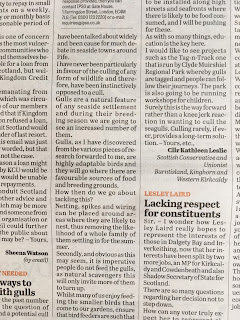 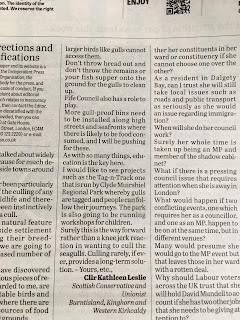 Email ThisBlogThis!Share to TwitterShare to FacebookShare to Pinterest
Labels: Seagulls