However, for the majority of us, thankfully that is not our number one priority. Instead we wish to see Scotland grow and develop and be successful, and for any nation that is through education. As a former teacher, education and the educational process will always be at the centre of what I do as an elected representative. If we do not invest the time, energy and money into the future of our young people then we will not grow and prosper as a nation and we will, above all, be failing future generations.

Without revisiting current figures on education in Scotland and the extensive damage done to a once global leading educational system, it is now well known that there has been huge cuts to teacher numbers since the SNP came to power - 4,000 to be precise. That coupled with specific shortages in STEM subjects, additional support needs staff shortages, falling literacy and numeracy rates (we have moved beyond literacy and numeracy according to one SNP MSP...) and a so-called Curriculum for Excellence where there is a 92.8% pass rate for National 4 qualifications that have no examination and no external marking - is it any wonder young people wonder just what exactly the qualification means (clearly the young people are a lot more clued up that SNP politicians!).

This week I wrote a letter to local media following the announcement of an additional £399,000 to the pupil Attainment Fund here in Fife (incidentally small change to a national administration that stated in June 2016 it was sitting on a £75 million underspend from the previous year to go on day to day spending on schools and colleges), which is laughable (well actually, it isn't laughable) given the cuts made to local authority budgets which by extension lead to cuts in schools and education - 150,000 college places cut under the SNP.
Here are my thoughts for this week.

Whilst we should welcome the additional £399k to the pupil attainment Fund here in Fife (Dunfermline Press 3/7/17) we should remember this is merely small change to the Scottish Government which despite claims that education is its number one priority, has cut funding to local authorities, and seen a decline in teacher numbers over the past decade.

Last year’s PISA scores saw Scotland record its worst ever performance in education on an international ranking. An absolute disgrace for a nation that once had an education system that was admired globally as one of the best. However, is it any surprise given the Scottish Government has discontinued the Scottish Survey of Literacy and Numeracy, skills claimed by SNP MP John Mason that Scotland had “moved on” from requiring in a high standard?

A focus on training more teachers, employing greater numbers of support staff particularly for young people with additional support needs, curriculum reform and a reversal of the thousands of college places, cut by the SNP, would be a start in putting young people at the centre of education again not only in Fife but across Scotland. 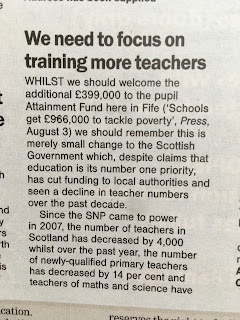 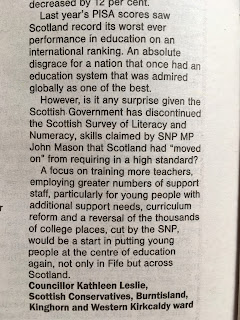 Email ThisBlogThis!Share to TwitterShare to FacebookShare to Pinterest
Labels: Number One Priority?